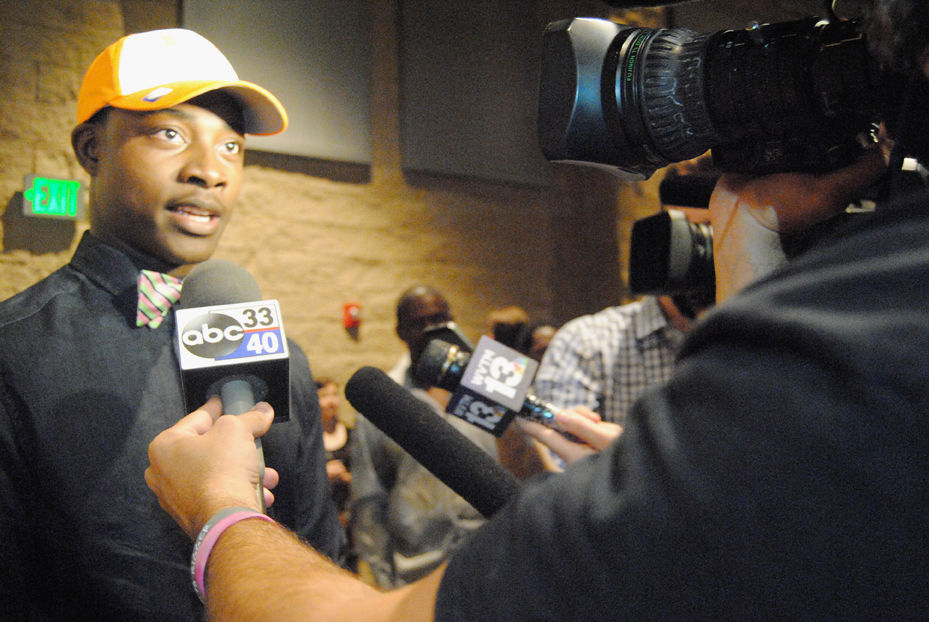 Marshall talks with reporters at the signing ceremony on April 28 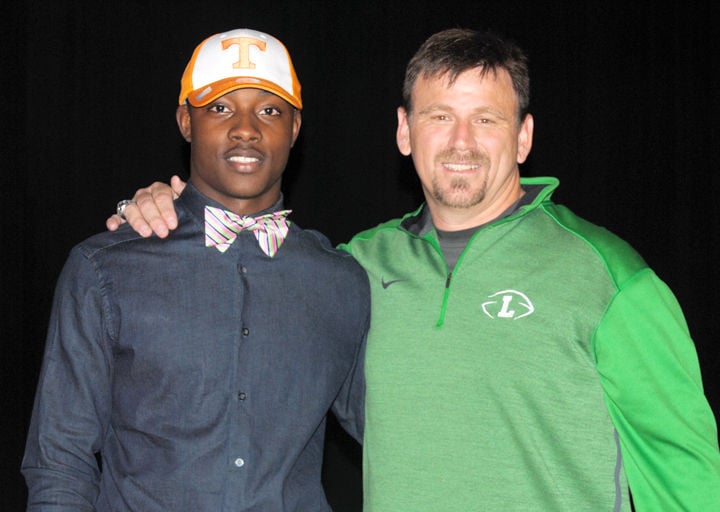 Leeds High quarterback TaDarryl Marshall stands with Leeds Head Football Coach Keith Etheredge after signing his letter of intent to play football for the University of Tennessee next year.

Catch Leeds High quarterback TaDarryl Marshall in action next weekend; Green Wave to play the Anniston Bulldogs at JSU on May 16

“In conclusion, I have decided to further my studies and play college football at the University of Tennessee.”

Those were the words of Leeds Green Wave quarterback — and future Tennessee Volunteer — TaDarryl Marshall last Tuesday afternoon, April 28, at a press conference held at Leeds High School. Marshall, entering his senior year of high school at LHS, made the early decision on his college of choice so he and his Green Wave teammates can focus on defending their AHSAA Class 4A region title and Football State Championship.

Marshall has been the starting quarterback for the Leeds Green Wave since his freshman year in 2012. Following tough losses to Trinity and a very tough 7-0 loss at Piedmont in a game of No. 1 versus No. 2, he helped guide the Green Wave to a second-half, come-from-behind win during the last regular season game against Alexandria. The Green Wave’s season ended in the third round of the playoffs with a 10-point loss to Fayette County.

Leeds followed that season up with another season of success. Then sophomore quarterback Marshall helped lead the Green Wave to the Class 3A State title game in Tuscaloosa. Marshall put on one of his best shows as quarterback, carrying the ball 25 times for 166 yards and going 11 for 23 for 147 yards with a touchdown and an interception. The Green Wave went on to lose 31-14 to a much bigger Madison Academy Team. The Green Wave put that loss in the back of their minds and fed on it throughout the summer, knowing they would open the season against the Mustangs in 2014.

Leeds got revenge on the Mustangs on ESPN with a 27-24, last-second win thanks to a game-winning field goal by Morgan Coston. The Green Wave rolled through the regular season undefeated until a week-eight, controversial loss at Dadeville. The loss motivated Marshall and the Green Wave, who stormed through the last two regular season games and on to the title game at Auburn’s Jordan Hare Stadium.

The Green Wave defense gave up only 14 points through the playoffs and posted a shutout against the Deshler Tigers in the title game. Marshall displayed more of his magic in the game going 6 of 11 for 98 yards and a touchdown and rushed for 107 yards on 20 carries. He was the game’s MVP.

With all of the success Marshall has had in his first three years, many schools became interested in the young man. Marshall compiled offers from Georgia Tech and Cincinnati, as well as Alabama, Auburn and Tennessee from the SEC. Mizzo, Cincy, and Tech made offers to him to play quarterback. Auburn made in offer to him for cornerback, which he does play from time to time at Leeds. Alabama offered him as an athlete, and Tennessee s offered him to play multiple positions. Already a Vols fan, a recent trip to the Tennessee Spring game last month sealed the deal for TaDarryl.

“I like the fans, they give off a family environment,” he told al.com.

Last season Marshall passed for 1,252 yards with 11 touchdowns and only four interceptions. He also rushed for 1,368 yards. The Class 4A title game MVP became the ninth commit to the 2016 class for the Tennessee Volunteers.

Leeds, who is in the middle of Spring practice, will play the Anniston Bulldogs in their Spring game, which will be held at Jacksonville State University Saturday May 16. Leeds will open the regular season on the road once again, this time in the Champions Challenge in Montgomery’s Cramton Bowl against Madison Academy on August 21.