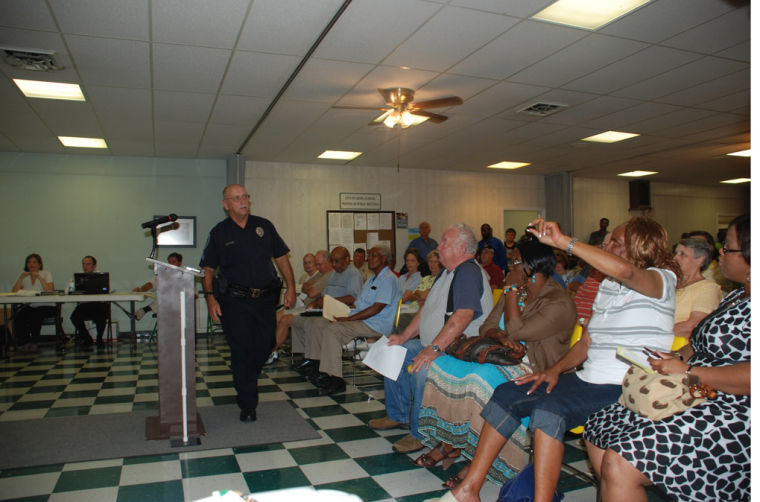 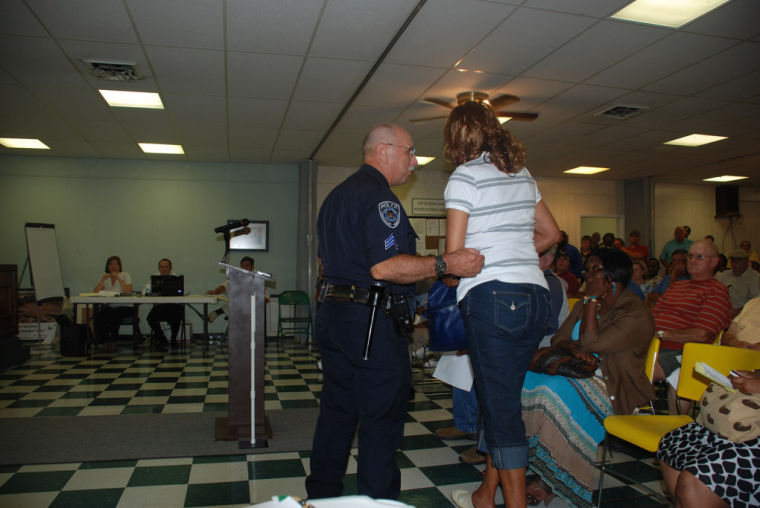 Glenn was then removed from Leeds’ City Council meeting.

Glenn was then removed from Leeds’ City Council meeting.

The Leeds City Council adopted a new zoning ordinance during a meeting Monday with a full house of citizens on hand, many there in opposition to the ordinance.

Citizens came out in droves to voice their concerns and listen to the council as they voted on the new zoning ordinance. The 300-plus crowd sat and stood around the walls of the room and waited for the matter to be addressed.

Citizens had gathered last week at the Leeds Middle School gym in a town hall meeting to voice their concerns and hear experts discuss the matter. Councilmen Johnny Kile and Kenneth Washington had attended the town hall meeting held on Thursday, July 30 to hear their constituents concerns. Dr. Carl Marbury, Doug Neal and Charlie Beavers addressed citizens and listened to citizen comments during the public meeting, which was hosted by the Leeds Herald.

The city council hosted a public hearing on the issue July 5.

A motion was made to pass the ordinance followed by a second. At that time, according to the rules of order, members of the council opened the subject for discussion.

Homebuilders are interested in the ordinance as it will dictate the types of houses they can build within the city. The ordinance calls for new dwellings to be at least 1,500 square feet.

The ordinance allows homeowners to rebuild on their property a home comparable to the one they owned or others in the neighborhood if the house is destroyed by fire or natural disaster.

Two companies with interest in the ordinance are U.S. Steel and Daniel Corporation, who have partnered to develop property associated with the Grand River shopping center.

The ordinance does distinguish between the general city zoning and the zoning involved in the district made up of property located near Exit 140, owned by U.S. Steel.

There are several issues of concern to U.S. Steel, including changing building height limitations from 65 feet to 45 feet. U.S. Steel has stated that several businesses are interested in locating to Exit 140, but that the decrease in building height could cost the city those businesses.

Another issue involved square footage for multi-family dwellings and allowing drive-through restaurants within the district.  Kelly Washburn, a business owner in Leeds, said at the hearing three weeks ago that she felt the 100-foot setbacks for heavy industrial was excessive.

Currently, the city charges a permit fee for signage for businesses and they are limited to two signs per year. the ordinance calls for an increase in the sign permit fee, which will be raised from $30 to $100

“I want to see this zoning on a map,” stated Washington at Monday’s meeting. “We can jump the gun and do this thing but it’s not the right thing to do.”

Many in the crowd applauded Washington as he addressed the mayor and the council.

“The planning and zoning commission is very (competent),” stated Councilwoman Charlotte Earnest. “We should have confidence in a document they send us. We have had several public meetings regarding this matter both with the zoning commission and this council.”

The voices from the audience rose until Mayor Eric Patterson asked for a return to order by gavel.

“We can amend this document after it is passes,” Patterson explained. “It has cost the city $15,000 and three years to produce this document and it needs to be voted on. Amendments to areas of concern can be addressed and advertised as changes are passed.” Kile asked the council to consider giving the ordinance 30 additional days for review and comment and Washington said the ordinance would not work for the city.

“There are some good parts to the ordinance,” said Washington. “This plan doesn’t fit the Russell Heights area. As matter of fact it doesn’t fit most of the areas.”

The crowd comments kept coming as the council members and city attorney weighed in their discussion. Mayor Patterson repeatedly pled with the crowd to withhold their comments until the public comment time in the agenda.

At one point, Charcey Glenn, a member of the Leeds Water Works Board and mother of Charles Barkley, was escorted out of the meeting area. Another citizen was also escourted out later in the meeting.

After the vote passing the zoning ordinance, many citizens stormed from the room continuing to comment as they left.

City officials stated that all state laws had been complied with in the advertising of public meetings regarding the zoning changes. Postings in media outlets, at the city hall and the library had announced meetings inviting public comment to the zoning and planning commission as well as to the city council members. The ordinance passed with a final vote of 4-2 with Kile and Washington voting against the ordinance.

Mayor Patterson and city officials advised citizens to pick up a petition for zoning changes at city hall.

“We want to hear what citizens have to say,” stated Patterson. “I only ask that no disruptions of the meeting occur. Citizens are not only welcome but encouraged to come express their concerns over the city of Leeds.”

The council addressed other matters on the agenda as well.

• The council voted to purchase a Rite-of-Way mower to replace the current city mower that has been hitting cars with rocks while mowing along roadways.

• A resolution passed allowing the city to lease a fire truck at the cost of $195 per day until the city’s own truck can be repaired. The lease is open-ended and will end as soon as the city truck is in working order. “This allows the city to provide appropriate fire protection to structure that require the use of our ladder truck.” said Mayor Patterson. “The lease rate is great when you break it down over time.”

• A matter regarding the football field bathrooms was removed from the agenda for the present due to excessively high bids.

• Ratification of a measure to receive bids on city roadways needing repair in each district were passed. The city will begin accepting bids as soon as possible with the goal of paving projects to be completed by December of this year. Multiple streets are being addressed including repaving and striping of Oak, Zeigler, Charles Barkley, Henry Ellen, Parnell, Farley and Rock Hampton to name a few.

• The city also addressed plans to improve drainage in flood prone areas. City engineer Frank Spencer addressed the council and advised them of his findings as he has scouted out areas of concern. He advised the council that breaking up the projects would be more economically advantageous than making a bundle bid for the city. “It allows smaller contractors to bid on these jobs,” he said. “You rule them out when you make it one big job.”

• The city also agreed to consider bids in the future for heating and cooling ventilation at the Leeds Civic Center as well as addressing hours of operation. That vote will be taken in the future.

• Richard Hall, a former Leeds resident and current property executor addressed the council regarding a lien on his home. City officials agreed to talk with Mr. Hall’s attorney of record to resolve a lien on his property for demolition that had not occurred. The agenda complete, the citizens took their opportunity to be heard.

• The public comment section of the agenda was heated. Residents took the podium one after another to express their displeasure with passing of the new zoning ordinance.

• Citizens from the Mt. Pleasant Baptist Church addressed their concerns on the closing of the road between Highway 78 and the Leeds High School.

“We had one church member that has already waited 15 minutes for the ambulance to get to her when she was sick,” said Ruth Tuck. “We want Coosa Avenue opened and this is not over.”

“We have asked you here in meetings to meet with us. Please give us a time and a place so you can explain to us what this zoning ordinance means for us,” said Connie Foster. “We want a district meeting with you as our representative.”