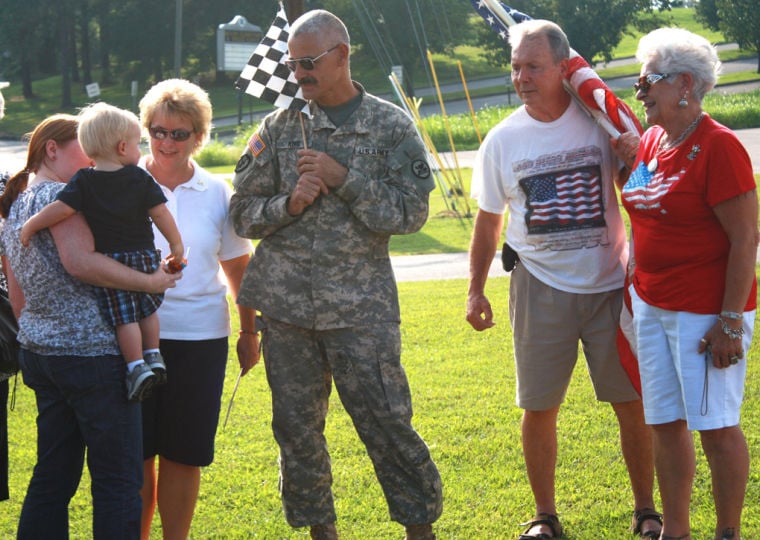 David King and his wife, Mary Kay, were greeted by family, friends and well-wishers in Moody. 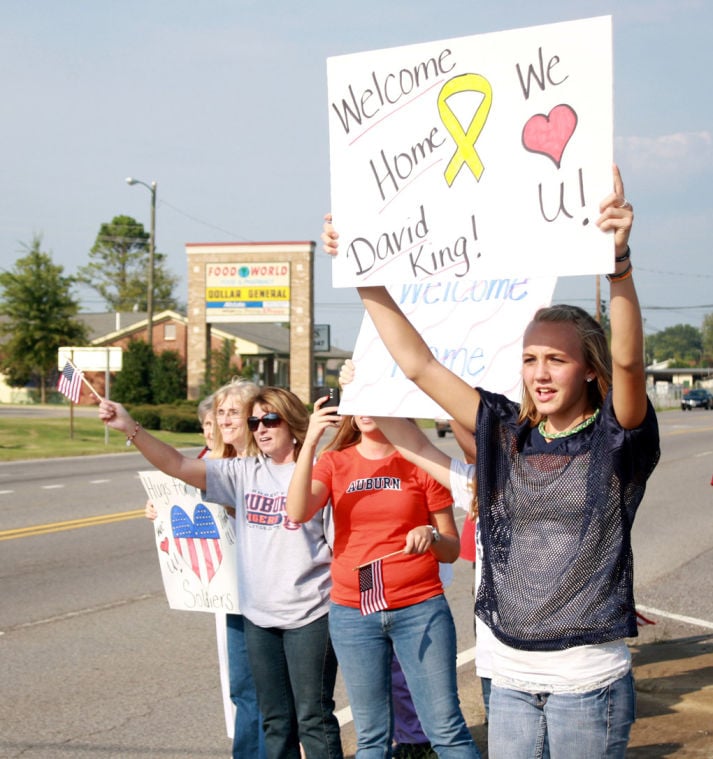 Many residents waving signs and flags greeted King after his 12-month deployment in Iraq. He was one of ten St. Clair County soldiers serving in Company B, 1169 Aviation Wing.

David King and his wife, Mary Kay, were greeted by family, friends and well-wishers in Moody.

Many residents waving signs and flags greeted King after his 12-month deployment in Iraq. He was one of ten St. Clair County soldiers serving in Company B, 1169 Aviation Wing.

After spending a year in Afghanistan, Chief Warrant Officer 4 David King was welcomed home. It began with a heartfelt greeting at the Birmingham Army Aviation Support Facility, and later, a star-spangled spectacle taking place on the Highway 411 crossroads in Moody.

The Moody Police Department escorted King up Highway 411 to the crossroads, where family, friends and complete strangers organized to welcome King home after a year overseas and to thank him for his service.

“When I saw the police car coming around us, I thought, ‘Thank God I'm not driving,’ because my driver's license expired in October of last year,” King said, with a laugh. “It was a big surprise, having a parade back home just for something I do every day. I don't look for glory in the job, it's something I've done my whole life, and I'd do it again tomorrow if I had to go.”

King has been in full-time military service for 32 years, and most recently served as a helicopter pilot.  His Sept. 3, 2009 departure was his second tour of duty, which began on his wife Mary Kay's birthday.

“For me, the second time was harder than the first time,” she said. “My boys are gone from home now, and I was alone for the first time. It was a hard year, but I have great family and friends who took care of me.”

To return unscathed on her birthday one year later was the best birthday present imaginable for Mary Kay. And even though it was her birthday, the King family followed David's desires for Pasquale's Pizza upon his return.

“We've been waiting on [eating Pasquale's Pizza] for over a year,” Mary Kay said.

“I love pizza, and didn't have it for the last year,” David explained, with a laugh.

After spending a year in Iraq, David said he's looking forward to taking a month off of work to relax and go fishing, before returning to full-time service with the National Guard.

“I hope he's looking forward to mowing the grass, because I'm giving that job up,” Mary Kay said with a smile.

“Doesn't bother me a bit,” David replied. “I've been looking at desert and rocks for the last year. I'll cut grass all day long.”