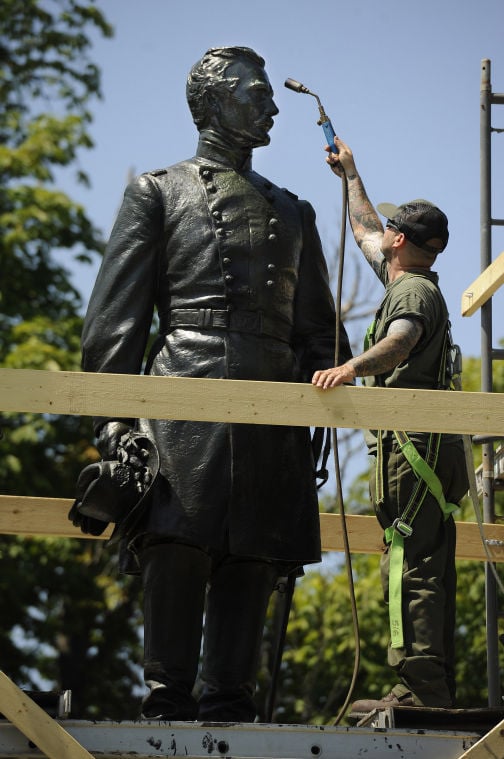 Jamie Revis works on a statue of Maj. Gen. Andrew Humpreys within the Fredericksburg National Cemetery at the Fredericksburg and Spotsylvania County Battlefields Memorial National Military Park in Fredericksburg, VA. The park faces financial constraints that affect staffing and repairs that have to be put on hold. 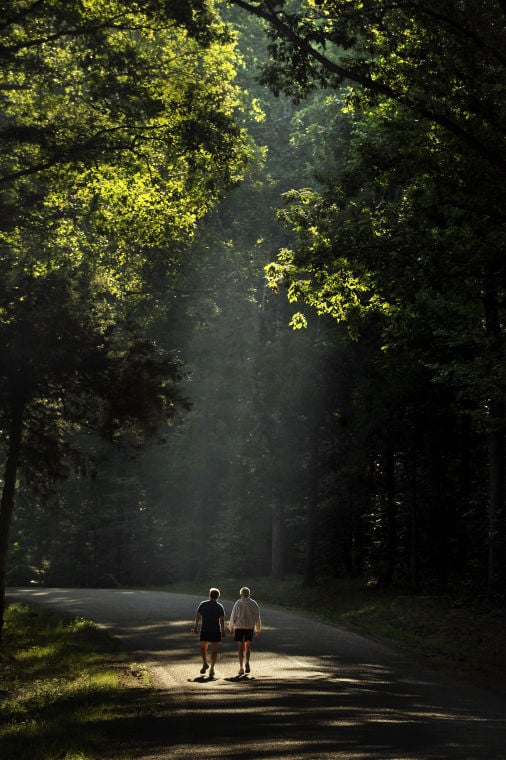 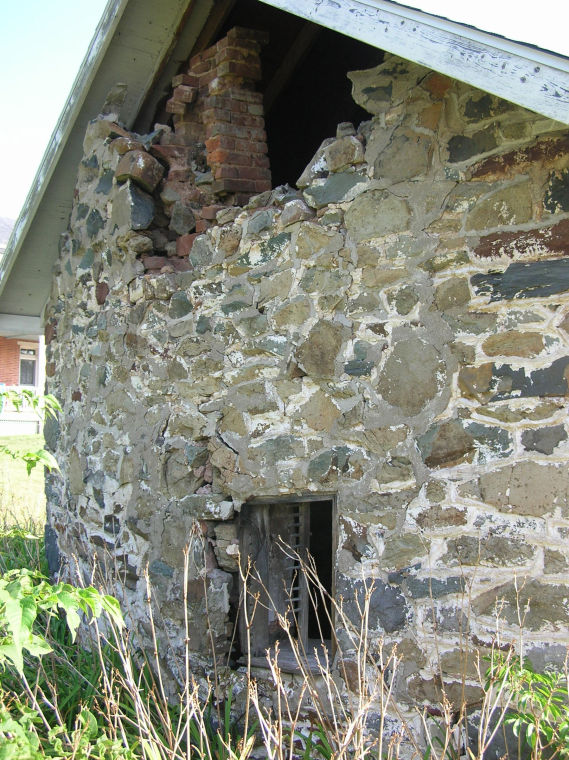 The Springhouse at the Josiah Benner farm in Gettysburg, Pa., was used as temporary cover for skirmishers of both armies and would have provided water and "refrigerated" food for wounded in the hospitals of the Benner house and barn. Until the National Park Service purchased the property in 2011, the springhouse was in grave danger of collapsing. Last winter park staff completed emergency stabilization on the structure which included archeology, and rebuilding several of the walls.

Jamie Revis works on a statue of Maj. Gen. Andrew Humpreys within the Fredericksburg National Cemetery at the Fredericksburg and Spotsylvania County Battlefields Memorial National Military Park in Fredericksburg, VA. The park faces financial constraints that affect staffing and repairs that have to be put on hold.

The Springhouse at the Josiah Benner farm in Gettysburg, Pa., was used as temporary cover for skirmishers of both armies and would have provided water and "refrigerated" food for wounded in the hospitals of the Benner house and barn. Until the National Park Service purchased the property in 2011, the springhouse was in grave danger of collapsing. Last winter park staff completed emergency stabilization on the structure which included archeology, and rebuilding several of the walls.

Chatham Manor, the elegant 241-year-old Georgian house that served as a Union headquarters during the Civil War, remains a must-see stop on tours of Fredericksburg and Spotsylvania National Military Park. But the grounds are not as they once were. The gardens are overgrown, and the greenhouse has broken windows and rotting wood frames.

The park's superintendent, Russell Smith, noted that the family who occupied the home in the 1920s "had nine or 10 gardeners. I have, like, half a gardener."

After more than a decade of scrimping and deferring maintenance and construction projects — and absorbing a 6 percent budget cut in the past two years — the signs of strain are beginning to surface at national parks across the country. The 469-mile Blue Ridge Parkway, which curves along the spine of the easternmost range of the Appalachian Mountains in Virginia and North Carolina, has a $385 million backlog of projects, mainly in road maintenance, and has been unable to fill 75 vacant positions since 2003. For the past three years, New Mexico's Bandelier National Monument has lacked the money to hire a specialist to protect its archaeological ruins and resources.

Jonathan Jarvis, the National Park Service director, said in an interview that his employees have been "entrepreneurial" in devising ways to cope with rising costs on a fixed budget.

"But we're kind of running out of ideas at some point here," Jarvis said. For years, the Park Service has supported day-to-day operations by taking money from its maintenance and land acquisition budget, he said. "The challenge is, we're robbing Peter to pay Paul."

Annual attendance at national parks has remained about the same, though visits through July this year total 201 million, up 1.5 percent from 2011. Park managers say they are alarmed at the prospect of both next year's budget and a possible 8 percent across-the-board cut if negotiators fail to reach a budget deal by January. The president's fiscal 2013 budget proposal — which was largely adopted by the House Appropriations Committee — would cut 218 full-time jobs, or 763 seasonal employees.

Phil Francis, superintendent of the Blue Ridge Parkway, said he's lost a third of his permanent maintenance crew in the past 11 years. Staff have gotten "a few visitor complaints" about conditions in the park, ranging from its restrooms to its overlooks.

"Of course we know these things," he said. "It's a challenge. We do the best we can, and make sure the impacts are as minimal as possible."

Thomas Kiernan, president of the National Parks Conservation Association, said policymakers face a critical decision as the park system approaches its 100th anniversary in 2016. A major influx of funds could mobilize public support for the system, he argued. Without it, he said, conditions at the parks will continue deteriorating and visits could drop sharply.

"It's clear that inadequate federal funding is the number one threat to the future of the national parks and the national park idea," Kiernan said. "We're at a crossroads of historic importance here."

Of the 397 park units, 158 have "friends groups" that help raise private funds. The congressionally chartered National Park Foundation has raised up to $150 million annually for parks in concert with those organizations in recent years, and it hopes to help expand them to 200 by 2016. But that's a fraction of the system's $2.6 billion annual budget.

National parks continue to enjoy significant bipartisan support, both from the presidential candidates and on Capitol Hill. Presumptive GOP nominee Mitt Romney has spoken during the campaign of how he "fell in love with the land in America" during family trips through national parks in a Rambler station wagon, and in a statement to the Post, described himself as "a passionate advocate of our national parks."

Rep. Ron Kind, D-Wis., who co-chairs the bipartisan Congressional National Parks Caucus, said that he has lobbied the administration and his colleagues to restore park funding but that he's "not optimistic" the current trajectory will reverse itself. "It's just the blind zeal for cuts in the discretionary part of the budget, regardless of the consequences," Kind said.

Since fixed costs represent such a high portion of park budgets — 92 percent for Fredericksburg and 88 percent for the Blue Ridge Parkway, for example — an 8 percent cut as part of sequestration could prompt closures in as many as 150 parks, according to estimates by the conservation association.

"Why don't we prioritize and realize the federal government cannot print money fast enough to do everything that needs to get done?" Bishop said.

In many ways, the parks' predicament is the result of federal decisions over the past 11 years to shift money to the operations budget at the expense of everything else. In 2001, operations constituted 64 percent of total park appropriations; in the 2013 budget, they account for 87 percent. This has left the system with an $11.4 billion backlog.

"Congress has emphasized the operations budget because it's what keeps the doors open," said Denis Galvin, who served as the National Park Service's deputy director from 1985 to 1989 and again from 1996 to 2002.

In Fredericksburg, the fiscal constraints are obvious. Smith has a list of construction and maintenance projects he'd like to complete that total more than $42 million, including removing trees that threaten the earthen fortifications troops built during the Civil War and the demolition of non-historic houses on the park's battlefields.

Smith said this is "the worst" budget crisis he's experienced during his 40-year Park Service career. "We've pulled out all the stops, and there's nowhere to go anymore."

John and Diane Anderson, retirees from Long Island, Va., south of Lynchburg, listened attentively as ranger Becky Oakes spoke movingly of the slaughter during the 1862 Battle of Fredericksburg, in which seven waves of Union soldiers died in an unsuccessful attempt to pierce Confederate lines at the Sunken Road.

Reciting by heart the words of Union soldiers who tugged on the sleeves of their comrades headed into battle, Oakes said, "It's no use boys, we've tried that. Nothing can stand there; it's only for the dead."

Diane Anderson praised Oakes but said of Chatham Manor, "That really needs to be refurbished. . . . The garden's overgrown and not kept up."

Oakes, a history major at Gettysburg College who plans to pursue a career with the Park Service after she graduates next year, exemplifies the system's budget woes. Although she was hired as a seasonal employee, budget constraints meant she had to work as an unpaid intern until Aug. 12, when enough money came through for a promotion.

"It's scary going in, knowing this is what you want to do, but anything can happen to the budget," Oakes said. "And these are factors beyond your control."