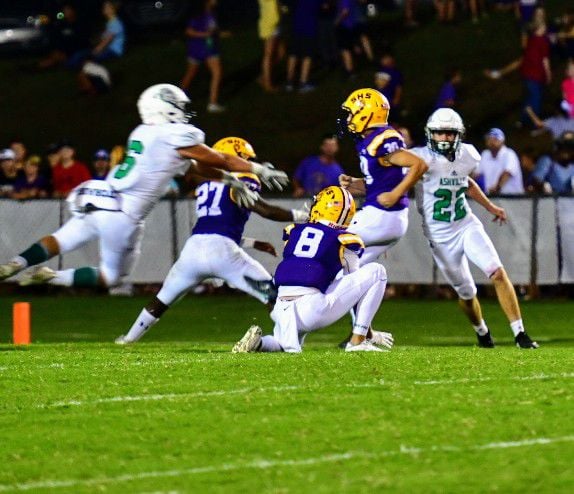 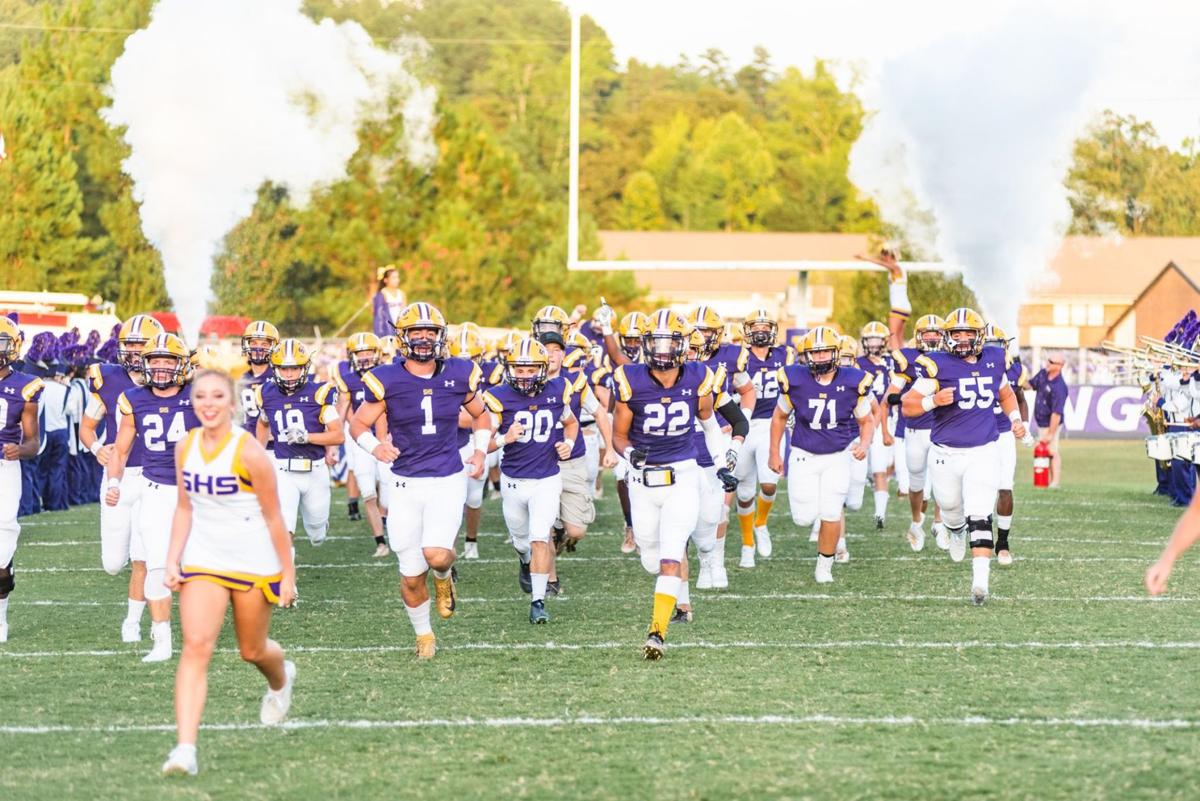 Ashville faces the elite of its region this week when it travels to Jacksonville, who have compiled a 17 game regular-season winning streak and is challenging for the top of the state’s Class 4A rankings.

The Bulldogs showed spine last week when they held Springville’s scoring to just 10 points, but they have yet to face a powerhouse offensive weapon like the Golden Eagles’ running back Rontarius Wiggins, who ran for 149 yards and three touchdowns with only four carries last week against J.B. Pennington in a rout that had Jacksonville ahead 36-0 at halftime.

Not only will the Bulldogs will be challenged all night with the running of Wiggins and Jae-Tag Morris, they will also have to contend with the very effective Golden Eagles quarterback Luke Jackson, who has completed 75 percent of his passes this season, along with the outstanding wide receiver Jaeden Barksdale who caught two touchdown passes last week.

After dominating Ragland in Week 0, Ashville’s offense sputtered against Springville last week, generating only seven points. The Bulldogs will need to find more production fast, but it will be likely a hard slog against Jacksonville, who have three defensive linemen who weigh over 260 pounds that regularly rotate in and out of the game to stay fresh in the interior. There is also their aggressive and fast linebacker Omarion Adams, who has played the first two games like an All-State prospect.

Even playing at their highest level on both sides of the ball, Ashville is outmatched. A ‘victory’ for Ashville will be to keep the game competitive through the first half and not to make penalties or turnovers to give Jacksonville the opportunity to end Ashville’s night early,

After a heart wrenching overtime defeat against a much-improved John Carroll squad last week, Leeds has the opportunity to bounce back against an Elmore County team that had its roster decimated from last season. This season the Panthers are young, small and inexperienced, a mix that the Green Wave should thoroughly dominate with its experienced roster and potent offense.

Leeds’ defense should be able to get back to its stingy ways because they just need to key on only one player, running back Lapatrick Brown; he is the only player on ECHS that has produced effectively so far this season. The Panthers hope to give Brown some support with running backs Keshawn Benson and Cole Booth, but they have yet to master the Panthers’ playbook and have shied away from firing through their O-Line blocks, bouncing to the outside and stalling instead.

Leeds is expected to feast on the inexperienced quarterbacks Dylan Weaver and Brody Ward. They are still a work in progress. Despite having a pretty effective offensive line in front of him, Weaver has shown inconsistencies in making handoff decisions at the mesh point, and the limited times Boothe has played has not been impressive.

Another handicap for ECHS is that many of their offensive linemen play both ways, which will wear down under the Green Wave’s rushing attack. The Panthers do have some good linebackers with Boothe, Keith Ballard and Ethan Geer, but that won’t be enough. It will be disappointing if Leeds doesn’t hang at least 30 points on the Panthers.

Both Moody and St. Clair County came out of their respective gates slow last week and come into this week’s rivalry game looking for their first victory of the season.

An objective look at both teams show that the most talented players are underclassmen; if one was to find future FBS prospects on either team, one would look at their freshmen and sophomore classes. That being said, the older starters on offense for Moody are equal in talent with their neighbors in Odenville. The Saints’ quarterback Josh Struggs has shown flashes of excellent play this season and has more experience than his counterpart at Moody (Connor Rush). Rush, on the other hand, appears to have better physical tools than Struggs, and it is only a matter of time before the Blue Devils quarterback will produce big results on the field. St. Clair County has an effective featured running back in Martez Stallworth, as does Moody with senior Terrance Moore; neither, however are guys that can break a game open for their teams (at least not yet). Both offensive lines are of similar size and physicality. Both receiving corps’ have able players. In other words, comparing St. Clair County and Moody offenses are a wash.

When we flip over to the defense, Moody enjoys the advantage. The Saints defense is young, learning, and could use a little more size. Moody on the other hand has a seasoned squad of angry, aggressive defenders. Giving up 36 points in last week’s first half game against Etowah Co. was disappointing, but it reflected ECHS’s excellence rather than Moody’s shortcomings. The Blue Devils boast a solid defensive front with Joel McCormick, Logan Suggs, and Alijah Daniel. Behind that line are linebackers Mason Shockley and Aiden Calvert, who are the best football players on the team.

This week is a county rivalry game and is being played in Odenville, but looking at both rosters from top to bottom reveals that the Blue Devils have an edge over the Saints.

Former Pell City coach Keith Etheredge leads an Oxford squad that has an overwhelming roster of huge linemen, electrifying playmakers and an angry, punishing defense loaded with FBS caliber talent. The Yellow Jackets are playing in midseason form and appear to be determined to march their way through the region to challenge for a 6A championship.

Pell City’s defense is in for a very challenging night. Oxford quarterback Trey Higgins looks like a prototypical college thrower, with a very accurate arm and great anticipation on intermediate and deep routes. The star of their backfield is running back J.B. Carlisle, the keeper of two consecutive 100-yard games and a penchant for breaking off big gains at any time. If Pell City keys on Carlisle, they will have to find a way to stop the misdirection of speed sweeps by wideout Roc Taylor, who ticked off two touchdowns on the ground last week.

Quarterback Trey Higgins went 8-for-10 for 86 yards, with a perfect 24-yard fade pass to the back corner of the end zone to Zay Britt. Higgins also scrambled for a 23-yard score.

Defensively the Yellow Jackets boast a dynamic duo in brothers Traquon and Antwon Fegans who were each involved in defensive touchdowns against Munford last week as part of a defensive effort that limited last week’s opponent to 25 total yards.

Pell City confronts a monster this Friday. Getting out of this game with a good performance and injury free would be a good thing as they look down the path for another way to qualify for a playoff spot within the region.

After watching Coach Mark Sanders resurrect Victory Christian’s program a few years ago, the Donoho coach has worked his magic again with Donoho, who is the most productive offensive powerhouse in Class 1A football. The Falcons regularly put up 40 or more points every game, and this season should prove to be no different.

To call what Sanders does ‘magical’ is not hyperbole. The Falcons lost ten very important senior players last year, which is a devastating blow for most Class 1A programs, but it seems that Sanders went around the student body and plugged in replacements as if it was a much bigger program.

Ragland’s defense has been susceptible to effective running attacks, and this week they will have to try and stop a superb running back in Rod Elston, who racked up more than 1400 yards on the ground last year. Ragland’s secondary will also be sorely tested by the Falcons’ new quarterback sophomore Ridge Hopkins; he has a rifle arm who has found great targets early this season in receiver Amari Smedley, who also plays in the backfield from time to time. Hopkins should enjoy some protection in the pocket with experienced linemen Payne Golden, Edwin Connell and Jase Alderman.

Ragland’s offense is nowhere near performing at the level it is capable and is overdue for a good showing. The Falcons have a good linebacker in Reid Williamson, but the defense as a whole has shown some holes early on. Donoho is clearly the favorite, but Ragland should not go in this week discouraged. This regional rivalry game may be what the Purple Devils need to show they can compete this year.

Springville’s first regional opponent is Sylacauga, who has an unjustified reputation in St. Clair County of being a powerhouse. The Aggies are a good team – but they are not that good. Springville can compete.

There is no getting around the fact that Sylacauga’s offensive line is big, big, big. They have moved their opponents’ defenses around the field pretty good this season, which gives their outstanding senior running back Jordan Ridgeway room to do his thing, which included a three-touchdown performance two weeks ago against Leeds. Ridgeway is joined in the backfield by Sophomore Maleek Pope, who grinded out over 100 yards last week in their opener.

Sylacauga’s rushing defense has been impressive; one look at game film confirms how this big, athletic group of guys swarm at the point of attack. This will be a huge test of Springville’s strength and conditioning. The Aggies will pound away at the Tigers’ offensive front, so Springville’s quick game will rely heavily on whether their O-Line will stand tall and not wither.

Springville’s riding high with a 2-0 start, but it was against substandard opposition. Lining up against the Aggies and giving them a game through the second half will be the real test for the Tigers’ progress.

The Lions have a great opportunity to bounce back from last week’s loss with a trip to Gaylesville, who is a struggling Class 1A program that posted a record of 3-7 last year. Gaylesville managed to only average 16 points per game while surrendering almost 34 points per game. On top of those middling statistics, Gaylesville also lost 13 players to graduation last year.

One player they do have back is their best athlete - Junior DJ Lee, a tailback, cornerback and return man who was named 2nd Team All-State in 2018. Helping Lee get downfield are guards Gage White, Carson Steele, and tackle Briley Mitchell – a big, solid trio of linemen who will likely outsize the Lions’ defensive front.

After Victory Christian’s disappointing start against Fayetteville, they line up this week against a team that will likely fall to the middle of the regional standings. If the Lions can beat Gaylesville, a playoff spot seems possible. A loss foretells a long, hard season for Victory Christian.