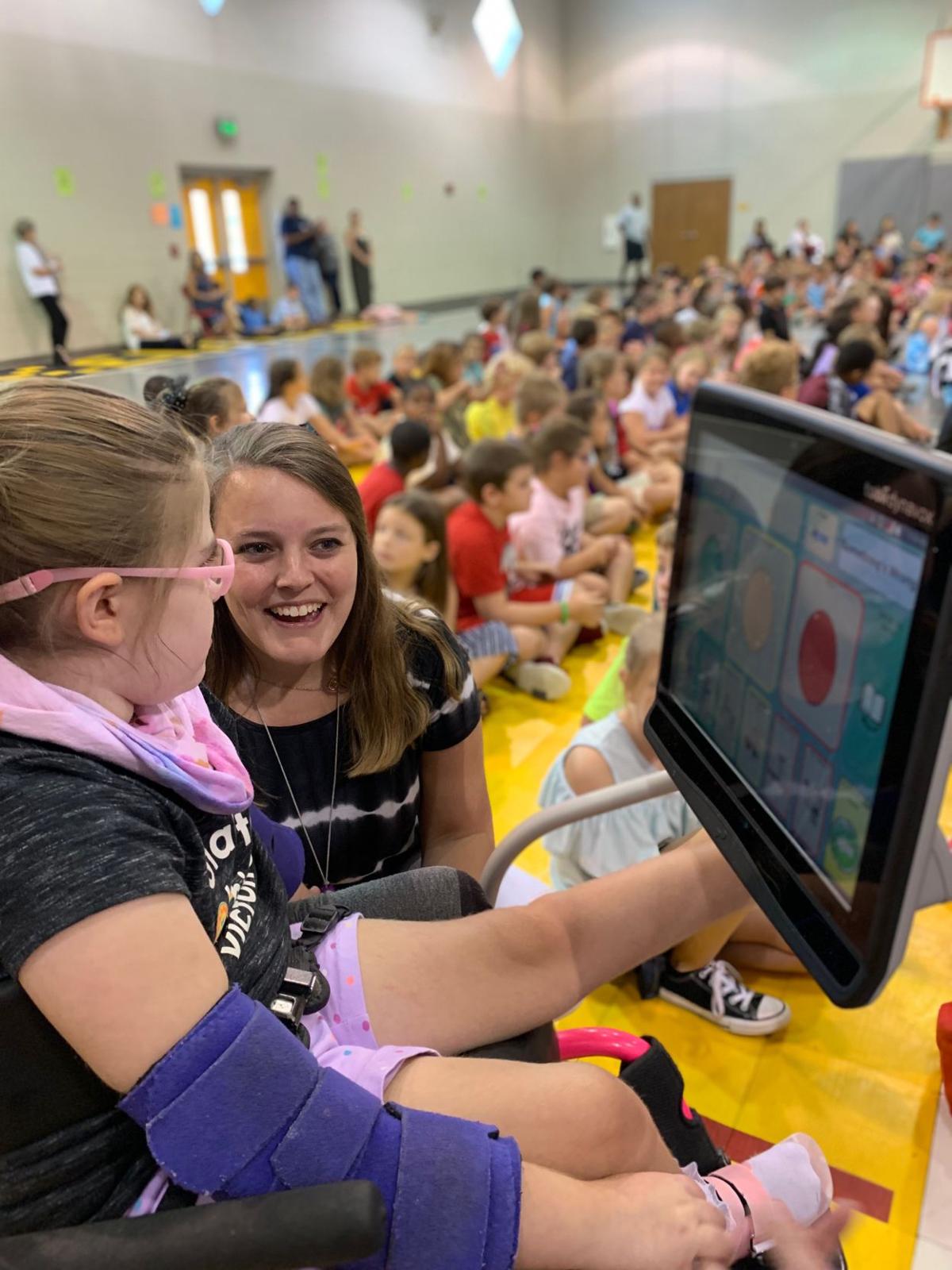 Eight year old Julie Grace Carroll speaks through her Tobii Dynavox eye gaze device that is controlled by infrared sensors that “read” the retinas of her eyes and allow her to select words and phrases on a computer that is mounted to her wheelchair or sits on a stand on her desk. Photo submitted 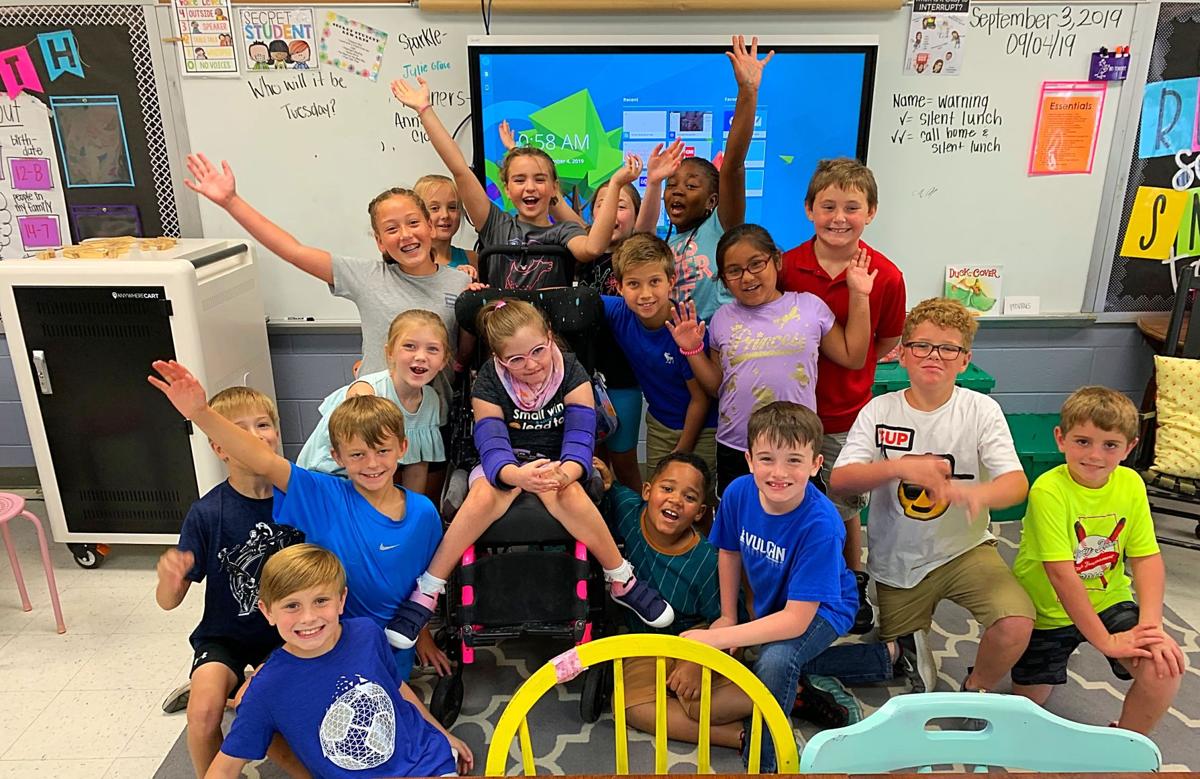 Eight year old Julie Grace Carroll speaks through her Tobii Dynavox eye gaze device that is controlled by infrared sensors that “read” the retinas of her eyes and allow her to select words and phrases on a computer that is mounted to her wheelchair or sits on a stand on her desk. Photo submitted

Imagine losing the ability to talk, walk and even use your hands seemingly overnight just as you’ve learned to manipulate your world. You hear and understand everything going on around you but you can not answer verbally.

October is Rett Syndrome Awareness Month and students at Walter M. Kennedy Elementary School in Pell City are raising awareness and supporting a classmate with various fundraising efforts during the week.

Children with Rett Syndrome generally develop normally the first 6-18 months of their lives but lose those skills as the disorder takes over. They are able to hear and understand but are trapped in a body that will not respond to them.

Local eight year old, Julie Grace Carroll, daughter of David and Melanie Carroll, has Rett Syndrome. She, too, met her milestones the first year of her life. She had the ability to hold her cup and feed herself. She said 6-8 words including “dada” and “mama” and “DJ” but lost all of these abilities by age three.

According to RettUniversity.org: “Rett Syndrome is a neurological/movement disorder which predominantly affects girls (approximately 1 in 10,000). Many attain developmental milestones from birth to age two or three, but then begin to regress. Others are slow to develop from birth. It affects all aspects of motor control. In addition, there are cardiac, respiratory, gastrointestinal and orthopedic concerns. Rett is considered a "full-spectrum" disorder with varying severity and phenotypes depending on the child's unique genetic makeup, specific mutation, and/or percentage of cells skewed to use the mutated vs. the healthy copy of the Rett gene. Most girls have repetitive hand wringing and/or mouthing, although the age of onset varies. Another common symptom is disordered breathing to include hyperventilating, breath holding and shallow breathing. Teeth grinding is also prevalent.”

Currently there is no cure.

Children and adults with Rett Syndrome were once thought to be intellectually deficient because they had no way to express themselves. Technology has changed that.

Researchers have recently used eye gaze to challenge the old assumptions about children with Rett’s intellectual abilities. In one study, a team in Tel Aviv modified a standard vocabulary test, the Peabody Picture Vocabulary Test version 4, for a group of 17 girls with Rett. In a normal Peabody test, children are given sets of four pictures and asked to point to the one that best illustrates a word spoken by the examiner. In the modified version, the four pictures were displayed on a computer screen and the children indicated their response by looking at them.

Remarkably, almost a third of the girls showed a vocabulary at a level indicative of either mild intellectual impairment or even within the normal range.

In a second US study, researchers at the Boston Children’s Hospital tested 47 girls with Rett using another standardized test of ability, the Mullen Scales of Early Learning, which tests children’s developmental progress across the board.

The girls performed predictably poorly on the fine motor and expressive language elements of the test. But again using eye gaze, for the elements that assessed understanding, they showed a wide range of scores. While some showed severe impairment, others were well within the normal range. Children diagnosed with milder Rett syndrome and without a history of seizures typically performed better.

Julie Grace is a 3rd grader at Walter M. Kennedy Elementary School, and is among thousands proving that she’s “in there” and hears and understands everything going on around her. Her team at WMK this year consists of Tammy Tucker, Chasity Boyle, Flora Hayes, Carlton Brown and Ashley Owen. These teachers and specialists work tirelessly to facilitate fully-included general education for Julie Grace and many others at the school.

During Julie Grace’s kindergarten school year, team members visited Shelby County schools to learn more about the program they had in place for another child with Rett Syndrome. This valuable experience along with training through on-line courses through Rett University as well as a full day of training with world-renowned communication and education specialist, Susan Norwell, allowed Julie Grace’s team to develop a program that allows her to participate in the regular classroom curriculum.

“It takes a lot of thinking outside the box and going with Plans B, C, and D some days,” Julie Grace’s mom, Melanie Carroll says. “Because of the near constant breath-holding, seizures and other complications of Rett that Julie Grace currently has, the team works to optimize any time during the day that she is feeling well. This is the time they push as much classwork as they can but still allow her to be an eight year old and participate in P.E., music and art with her friends. Julie Grace loves to be with her peers and we feel that reading, writing and communicating with those friends will bring her the most happiness in life. She is even in the choir this year and Matthew Wall, the music teacher, has been great in thinking of ways to include her in the performances. That’s not an easy task with a non-verbal child with little to no hand-use.”

The team has been so successful in implementing their teaching methods that they were recently able to share their plan with a school from Carrollton, Georgia. The team from Georgia visited WMK and observed Julie Grace’s day and was able to ask questions and formulate a plan for their own program for a child with Rett Syndrome in a full-included classroom in their school. They also have another local Alabama school that has contacted them about visiting to see how they work with Julie on a daily basis.

Julie Grace now has a Tobii Dynavox eye gaze device that is controlled by infrared sensors that “read” the retinas of her eyes and allow her to select words and phrases on a computer that is mounted to her wheelchair or sits on a stand on her desk. This allows her to express herself.

Children with Rett syndrome have such a strong eye-gaze that this is the most efficient option for them. She also has the ability to look at choices to answer questions for schoolwork and to look at a person for a “yes” and look away for a “no”. She “writes” by selecting letters and core words from flip books that are held up by a communication partner.

Julie Grace is a one of four sisters and, according to her mother, she is very competitive.

“The day the team from Georgia visited, she and her communication partner, Mrs. Tammy, had lost a math game in the classroom by 4 points and she was not happy about it at all. She had already communicated that she was “upset” and “frustrated” on her Tobii. Later, she was working on writing a sentence with Mrs. Boyle and she chose “I want a” from her flip books and then went to her device and on the sports page started talking about “lose” “win”. Mrs. Tammy asked if her next word was “win” and did she want to say “I want a win” and Julie Grace looked at her very directly for a definite “yes”! We all communicate not only with our words but also with our facial expressions, our sounds, our body language. Julie Grace just happens to communicate with her eyes.”

Tammy Tucker and Julie Grace’s team at WMK are organizing a Rett Awareness week at the school. Monday October 14 is “Wear Purple for Rett day.” The community is asked to wear purple to show support for Julie Grace and all of those with Rett Syndrome.

Tuesday is Hat Day and Crazy Hair Day. The students may donate a $1 to wear a hat to school or have crazy hair for the day. Wednesday is Run for Rett day. Students will run their laps in P.E. and members of the PCHS Key Club, football team and cheerleaders will be there to hand out “#OverPowerRett” and “Flower the Power” tattoos and stickers to the runners. Thursday is Jammies for Julie day. Students may donate a $1 and wear their PJs to school for the day. Friday is Team up for Rett day. Students are encouraged to wear their favorite team colors.

There will also be Julies Army of Hope bracelets and #RiseAboveRett hair ties for sale at the WMK school store throughout the month of October.

Julie Grace’s family and friends have also created a video about Rett Syndrome that will be shown during Rett Syndrome Awareness week.

All proceeds from these events will be donated through Girl Power 2 Cure and Rett Syndrome.org to the Rettland Foundation. The Rettland Foundation Chloe’s Fund is a program for families currently enrolled in a clinical trial for Rett Syndrome. The purpose of this program is to help ensure that no family is unable to help change the world by participating in a clinical trial due to financial resources.

Local father and son, Henry and Bennett Fisher hiked the entire 2,189 miles of the Appalachian Trail in 2015 to raise awareness and funding for a cure for Rett Syndrome. Then in 2016 Bennett and Birmingham-native William Wells hiked the Pacific Crest trail and supported a cure with their hike as well. The PCHS Key Club has organized an annual Purple Color run four years in a row to raise awareness and funding. The Carrolls would like to thank the local community for their support on this journey.

Julie Grace’s mom says, “There is so much research going on right now even right here in Birmingham. Dr. Alan Percy, leading specialist in Rett Syndrome, is here at UAB. He has spent his life working diligently with scientists world-wide for a cure. A cure for Rett Syndrome could lead to a cure for so many other neurological conditions. It has already been completely reversed in laboratory mice. Not only do we need funds for research but we need to educate more people so that children are diagnosed earlier and can get the therapies they need to keep them strong and healthy until the cure comes. “