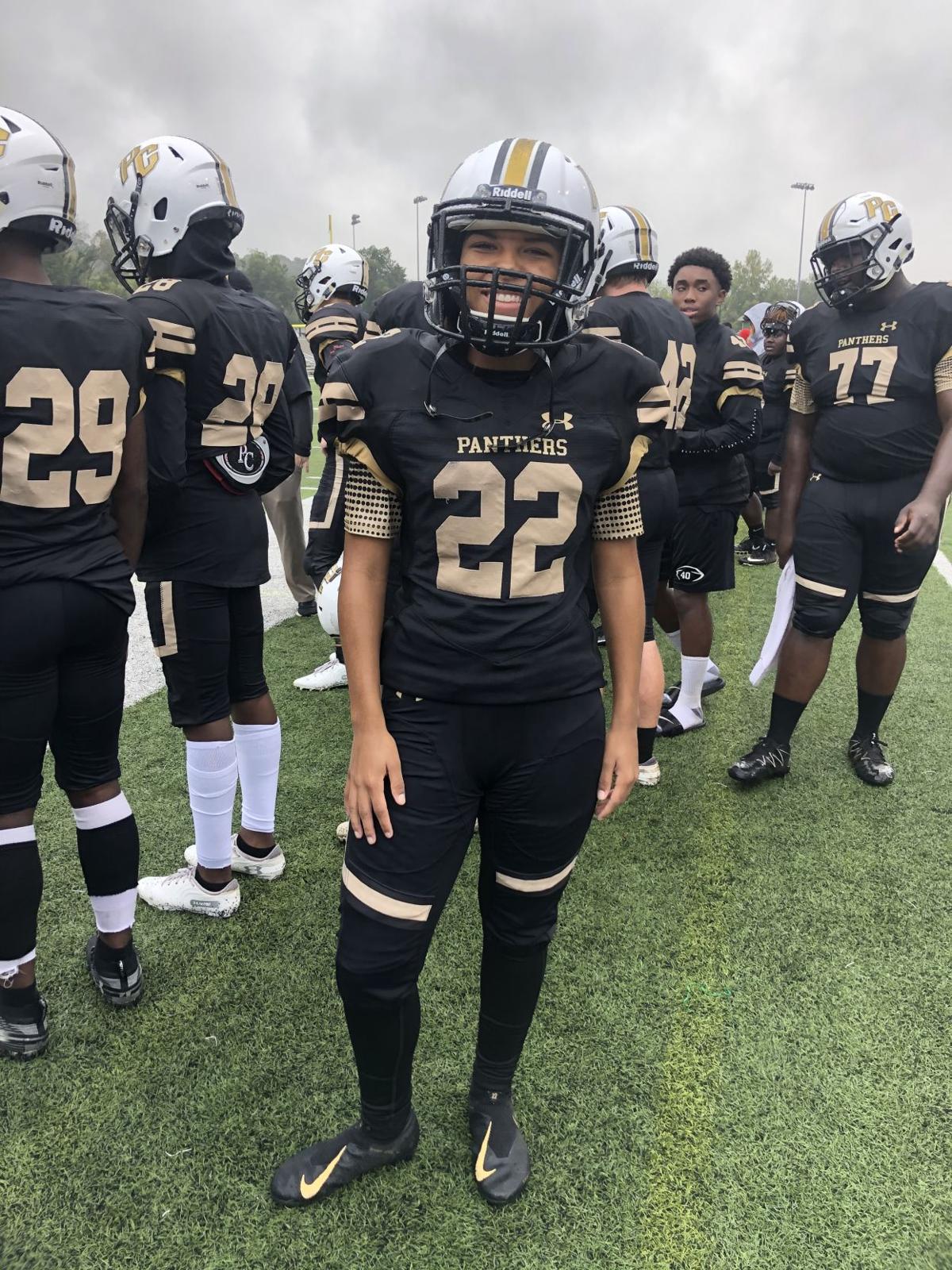 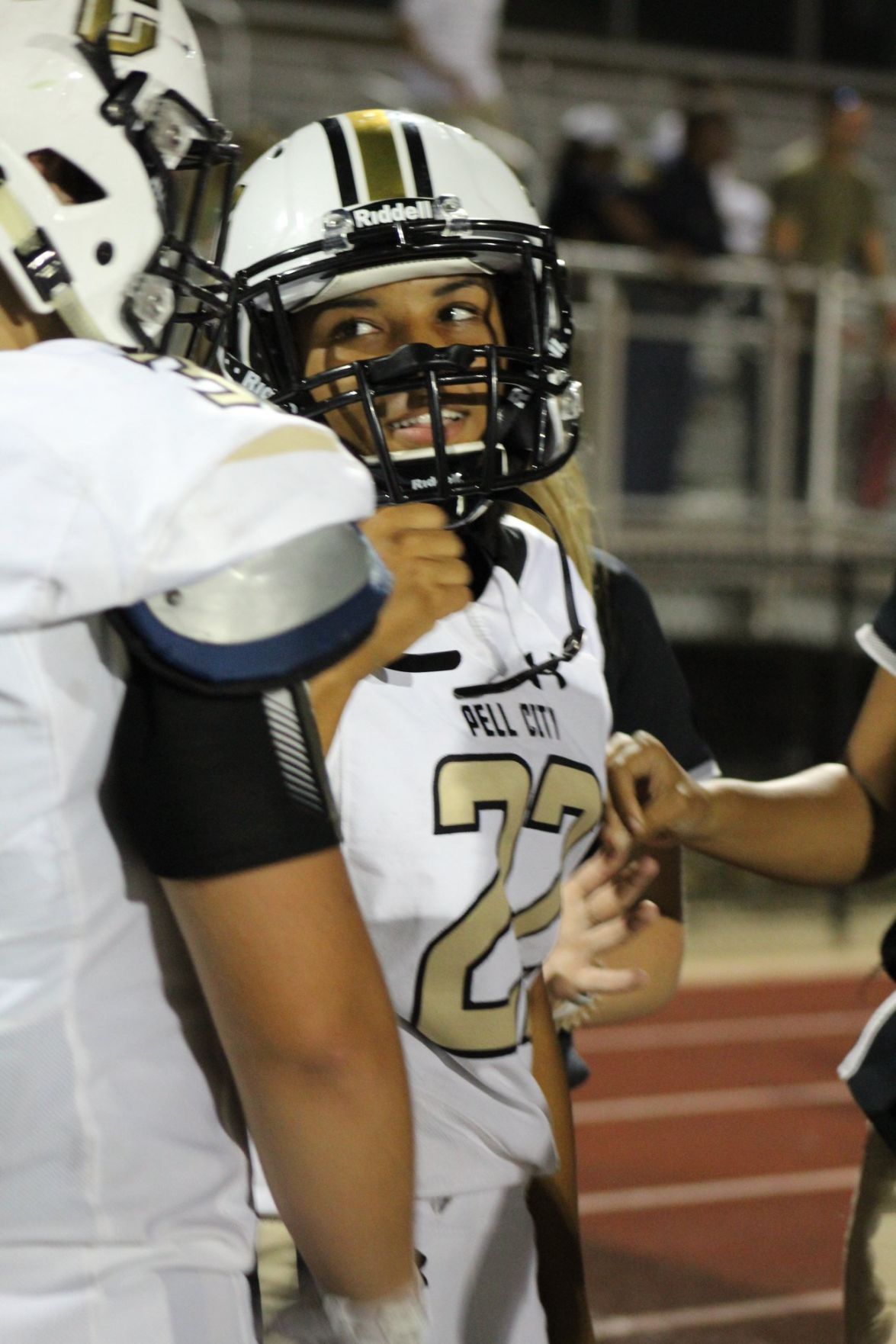 Teammates congratulate Harper Bell after her first kick of the season against the Huffman Vikings. Photo submitted

Teammates congratulate Harper Bell after her first kick of the season against the Huffman Vikings. Photo submitted

When No. 22 takes the field fans are experiencing history being made.

As Pell City High School’s (PCHS) first female kicker, Harper Bell is hoping to inspire others to step out of their comfort zone. Bell’s a seasoned soccer player, having played for 14 years, and it's exactly where the idea sparked for her to play football.

“Bubba Roberts first brought it up when he saw me play soccer,” said Bell. “Coach Jennifer Lee also recommended me.”

At first Bell wasn’t sure how things would go, but after building confidence through gaining game reps, now she feels right at home. Bell’s first football kicking opportunity arrived on Thursday, Sept. 19 in a face-off with the Huffman Vikings.

Not to worry, Bell’s skills delivered the extra point.

At first Bell was unsure how she’d be accepted by her teammates, but she said the approximately 80 guys on the team happily welcomed her.

“I didn’t know how they would take a girl being on the team, but my teammates have been super supportive,” Bell stated.

Bell says she’s hard on herself, but her teammates know how to keep her motivated.

“They tell me to shake it off. They pick me up a lot and help me not take things too personally.”

An avid Alabama fan, Bell loves saying, “Roll Tide,” and watching her favorite team every Saturday with her dad.

“My dad and I have our chips and our lucky hats,” exclaimed Bell.

Her all time favorite Alabama player is Mark Ingram and her current favorites are Crimson Tide quarterback Tua Tagovailoa and Najee Harris.

“Julie Ertz is killing it,” Bell said, “She’s everything I want to be.”

A star on and off the field, Bell made a 30 on her ACT. Her greatest advice to other students striving to get good grades is time management.

“You know how much time practice will take and playing sports, so you have to prioritize. It’s all about time management.”

As for making history by being PCHS’s first female kicker, Bell feels overwhelmed that she’s the first of anything.

For folks looking for encouragement to try new things or overcome challenges, Bell has these wise words.

“Before every game my dad told me leave it all on the field,” she said.

Describing the on-field experience versus being a fan in the stands, Bell says it’s really different. As Bell reaches the midway part to her Senior year and with football season over, she’s excited for her Senior soccer year. She’s also excited for what happens after graduation.

Bell hopes to be a radiologist and has already been accepted to the University of Alabama at Birmingham (UAB). Bell’s earned an academic scholarship for full tuition and hopes to use her good grades to walk on as a UAB soccer player.

As welcomed as Bell was to the PCHS football team, Bell is that way too. She’s a force on the field and in the classroom. And although she’s never been tackled or had to tackle, if her teammates needed she’d do it for her team. If you’re looking for inspiration from the first female kicker at PCHS and the number nine Senior in the Class of 2020, do like Bell, make it happen and just do it.