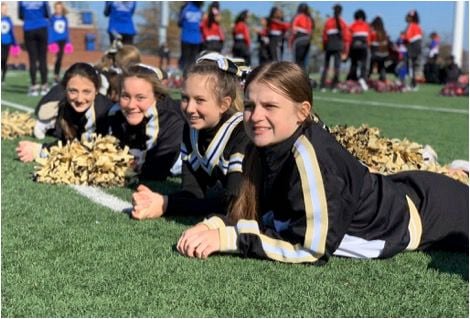 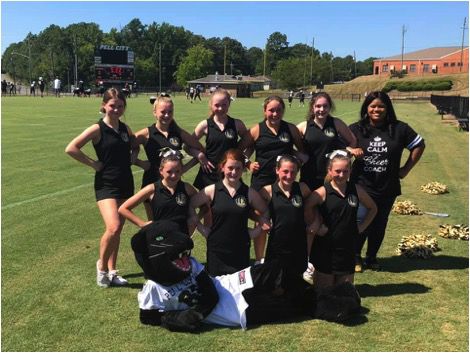 The Duran Jr. High School cheer team and mascot showcased their talents during the Tennessee Titans halftime show in Nashville at the Nissan Stadium.

The team performed in front of over 60,000 people at the NFL Halftime Show, and also visited many of the sites of Nashville, including the Johnny Cash Museum, Madame Tussaud’s Wax Museum, the Country Music Hall of Fame, RCA Studio B where Elvis famously recorded, the Hard Rock Café, and ended things at the Grand Ole Opry.

According to one of the squad’s captains, Matilee Bridgewater (8th grade), she exclaims, “The Tennessee trip was a fun experience for everyone. While visiting Madame Tussaud’s Wax Museum, we met the famous singer Brenda Lee, who is known for her hit, “Rocking Around the Christmas Tree.” The performance on Sunday was also a fun experience. I would like to thank Coach Ivy for putting all of this together. We really appreciate her! Thank you Coach Ivy!”

“The Tennessee Titans trip was a great learning experience for cheer and much more. Our team was given the opportunity to work together with other schools and participate in a once in a lifetime experience,” said Kirstin Coley, another squad captain. “We had a great time continuing to build on our team chemistry while visiting many places together for the first time! It was a lot of hard work, but we all made it happen. I will always look back at the enjoyment and fun times we had in Nashville and along the road to get there!”

So far, the team agreed that it was a fun and memorable experience.

“That was my first NFL game to ever attend and it was amazing! I had the best time with my team and coach. It’s an experience I will never forget, and I hope we have the chance to do it again!” said Ella Nunnally, another squad captain.

According to Ivy Patterson, the Duran Jr. High Cheer Coach, she states, “Taking my athletes to Nashville was something that I had planned earlier in the year. I wanted all of the team, which is a combination of athletes from Duran South Jr. High School and Duran North Jr. High School, to have an experience that they could remember for the rest of their lives. I also wanted them to have a chance to experience things in Nashville that they may have never experienced, such as the Country Music Hall of Fame and the Grand Ole Opry. Overall, I feel like everyone had an awesome time, including our mascot, Garrett Henderson.”

“Performing in the Tennessee Titans stadium was cool, and a great opportunity,” said Garret Henderson, the Panther mascot. “It was also interesting to watch different groups from several states come together to perform a single routine with only a couple of hours of practice time together. Overall, it was just a great trip, an awesome experience and one that I will always remember.”

“I was excited about the trip, and hopeful that the girls would have a wonderful experience and I feel like that was accomplished,” said Dr. Corey O’Neal, principal of Duran South Jr. High School.