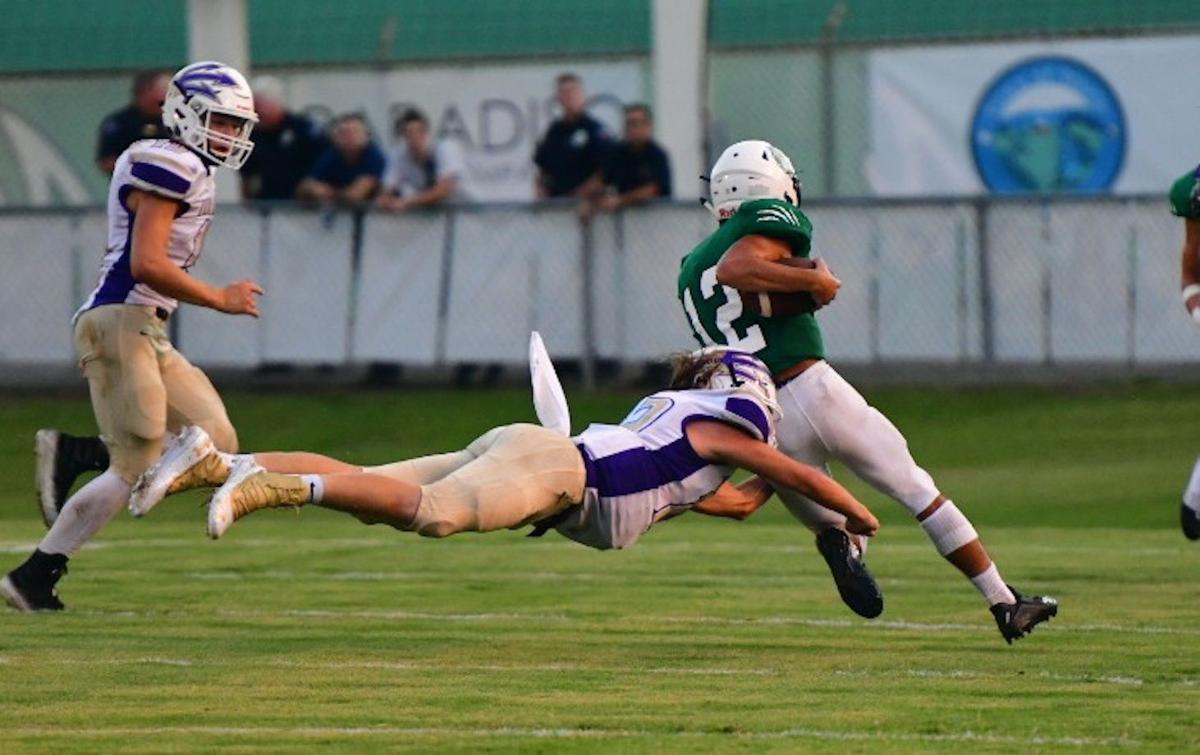 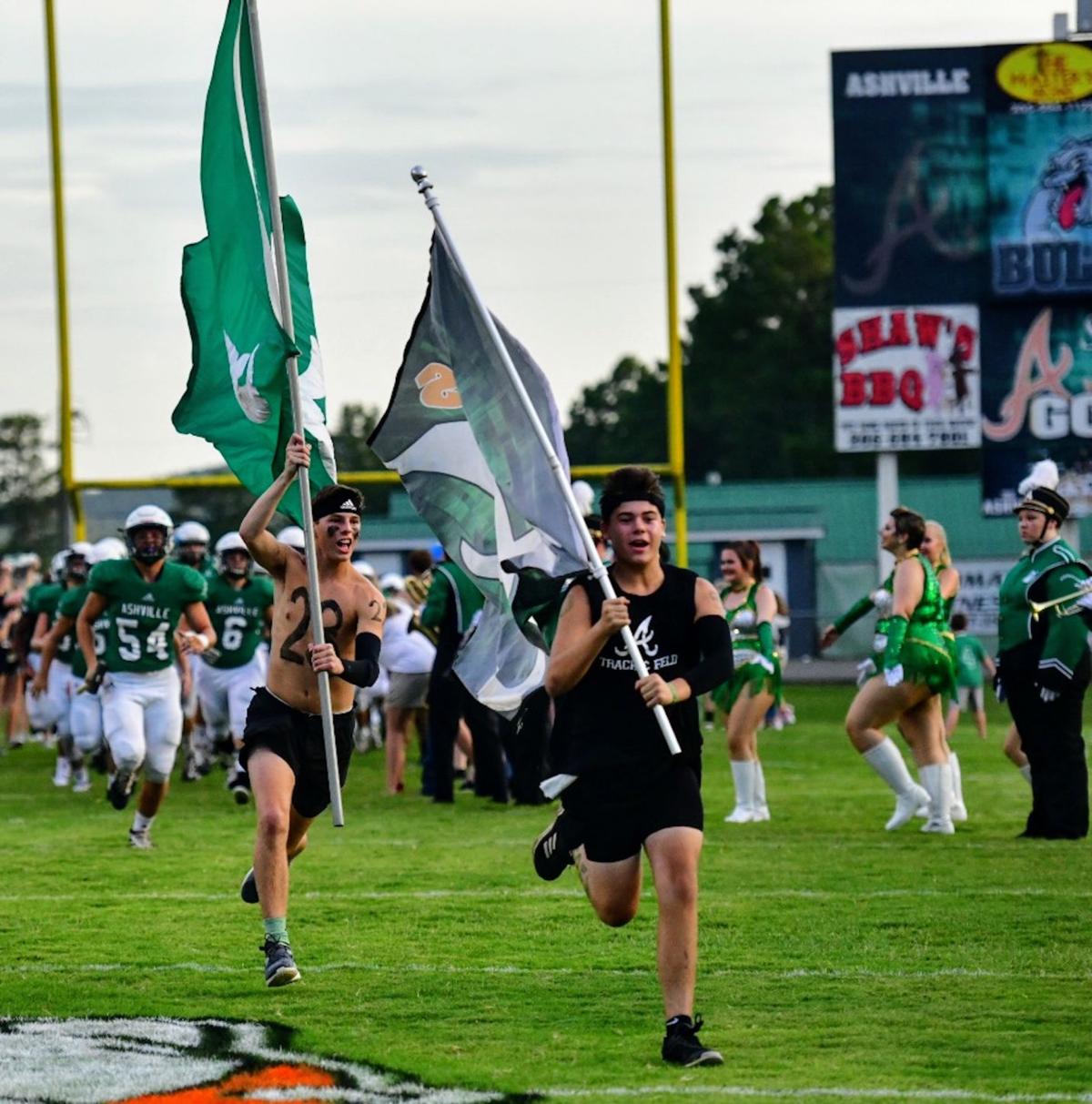 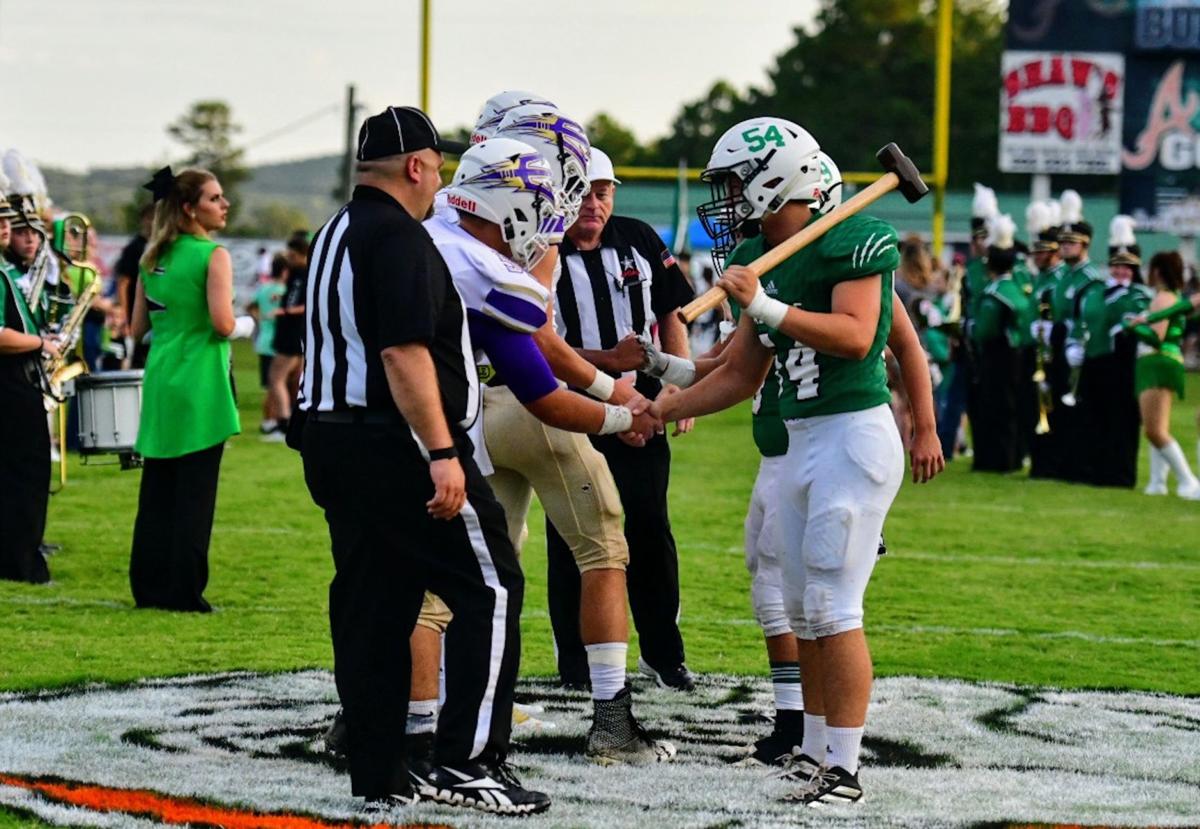 Last week the Ashville Bulldogs ran up and down a completely outmatched Ragland squad in a 35-0 rout. On offense Ashville’s quarterback Dylan Harris is supported by a deep backfield of seniors RB Ty Armstrong, Maurice Preston (#2) and slotback Nathan Phillips shined, with great situational plays by Luke Harris. This stable of runners will give Springville’s defense a huge challenge to keep track of where the ball is in this multidirectional rushing attack. The Bulldogs dynamic rushing offense opens opportunities for play-action passing downfield to Phillips and senior wide receiver Derrick Walker. Fortunately for Springville they field an experienced and talented defense, with a front led by a huge noseguard Sophomore DJ Salas and Senior Defensive End Bryce Storie, backed up by the great linebacking duo of Seniors Braden Hughes and John Raby. Ashville will need to jump out early offensively and protect the ball before Springville’s defense is able to make adjustments which is expected to snuff out much of the Bulldogs’ running game in the second half.

Springville’s offense that showed so much promise in their opening game against Hayden has a real opportunity to gobble up a lot of yards and points against Ashville’s young defense. Behind the Tigers’ rock solid offensive line Junior quarterback Pearson Baldwin looked as good as advertised in his opening start against Hayden last week, and is in a good position to exploit the Bulldogs’ developing cornerbacks with the very talented senior wide receiver Jace Hayes. Ashville’s defense does have solid players down its spine with hard-hitting junior linebacker Luke Harris and Free Safety Adriane Hernandez, but the rest of the Bulldogs’ defense appears to be a bit undersized and not very deep.

Leeds faces a challenge this week as they travel to Homewood to take on John Carroll.

Leeds’ best option this week is to go directly at John Carroll with their running attack. The one-two punch of Senior running back Jakobi Hunter and Junior fullback Cameron Dunklin should gather steam throughout the game against the Cavaliers’ improved yet undersized defensive front. It may be tempting for the Green Wave to stretch John Carroll’s defense by passing the ball to Junior wide receiver Omar Conley, but that could backfire after having witnessed the spectacular play of Cavalier Cornerback Isaiah Ambroise, who caused significant disruptions to St. Clair’s offense last week.

Leeds bulked up defensive line is anchored by Junior Tyrone Townes Jr. and Sophomore Aidan Howard who need to perform at a high level to tame John Carroll’s running attack led by Jeremiah Gibson, a junior tailback transfer from Washington, D.C. who ran for 237 yards and five touchdowns against St. Clair County last week. Limiting the damage Gibson and Aaron Mason (who added over 100 yards rushing to the Cavalier total last week) can afflict on Leeds this week must be done in order to force the Cavaliers’ offense to become one dimensional. That strategy, however, still leaves John Carrol’s receiving weapons in Senior wideout Brock Sanders and Junior Ethan Cull out on the wings, which can revive John Carroll’s running attack as they try to expand and contract the Green Wave’s defense.

Then last week happened. Etowah stepped up in classification and thumped 7A Gadsden City.

Moody’s surge of young underclassmen is balanced with veteran standouts on defense in Senior defensive linemen Joel McCormick and Alijah Daniel joined by Senior linebackers Mason Shockley, Christian Archer and Aidan Calvert. Etowah’s quarterback Brady Troup will be giving a lot of carries to their featured back on offense, the very talented Montavious Davis supported by the very effective running back junior Trent Davis. Stopping Davis will be a daunting challenge, but considering how good Moody’s defensive interior is at slowing down rushing offenses, the game will hinge on how Moody’s secondary deals with a solid duo of Etowah receivers in Devin Laster and Ollie Finch.

Moody has seen this situation before. Last season the St. Clair County Saints took the field after losing all of their most talented players from their superb 2017 campaign. Depleted and rebuilding, the Saints were defeated by the Blue Devils. Etowah appears to be much better than that St. Clair squad, but Moody still hopes that they can lay a trap for Etowah.

Pell City opened their season with a heartbreaking loss against Fort Payne while Calera started the season as if they were shot out of a rocket, jumping out to a 27-0 halftime lead against opening opponent Pelham before managing to fight off a comeback and secure a 27-20 win.

The Panthers key to the game is to not allow Calera’s running attack to take over. The heart of the Eagles’ running game is star running back Senior Blake Shoddie, who scored two touchdowns last week. He was matched in scoring by Sophomore running back Christopher Cotton-Taylor, who broke off a 68 yard touchdown last week to go along with Calera’s last touchdown of the evening.

Calera likes to jump out to early leads, but then fade a bit after halftime. Pell City’s reputation as a four-quarter team will benefit them if they can tap into that endurance. Another close game is in the offing, which gives Pell City the opportunity to get to .500 before the heart of regional play begins.

A lot of weight will bear down on the shoulders of Pell City quarterback Mitchell Gossett. Quick handoffs, and three-step drops will have to be executed at a high level to counter what will be bearing down on him from the defense. Calera has Senior defensive tackle Jayson Jones, a 6’6” 330lbs four-star University of Alabama commitment. Jones regularly tears through double teams and has a quick step into the backfield. Gossett’s game will be from the hashes to the sidelines this week. How he manages those flanks and is able to avoid mistakes will make a contest out of this matchup.

Ragland was painfully laid out by county rival Ashville, who hammered Ragland with 32 first half points and hardly let Ragland even sniff midfield throughout the game.

In remarkable contrast, The Westbrook Christian Warriors were a mean, lean, scoring machine this past Friday, hanging 50 points on Coosa Christian in their home opener.

Westbrook has an explosive offense that scores early and often. Warriors’ quarterback Will Noles is a multidimensional threat, who will run the ball effectively with teammates in the backfield including running backs Freshman KarMichael Cattling and veteran Dartavious Britton. If Ragland can somehow manage to button up this duo, Noles has an effective passing arm aimed at talented targets in Joe Tucker and Evan Delp.

A positive is that St. Clair County showed it could make effective adjustments and compete.

St. Clair’s quarterback Joshua Struggs debuted with two touchdowns while directing an effective comeback in the second half that fell just short. Struggs, a Sophomore, leads a youth movement in Odenville and hopes to continue that success this week by moving in the pocket and finding scoring threats like Sophomore wideouts Jacoby Blanks and Jackson Lindsey.

The Fighting Saints face a Cherokee County team with a new coach (Jacob Kelley) who is tasked to continue the Warriors tradition of success, including 11 playoff appearances since 2000. Kelley spent the summer trying to fill a lot of holes in this season’s roster. First, quarterback Slade Alexander has taken over the starting position, and has the potential of being a successful pass-first quarterback with his collection of effective receivers in Connor Elrod, Courtlin Brooks, Whit Johnson and Colton Hill. Another young talent who will play on both sides of the ball is running back/linebacker Julian Bynum. Overall the roster is a collection of talented players.

The Saints offense must be aware of the Warriors’ best defensive weapon, first-team All-State Linebacker Kendrick Fife who will give St. Clair County’s offense big patches of field to avoid in order to get downfield without endangering the ball.

Not much is known about Fayetteville.

The Wolves’s 17-8 victory over Woodland with two scores in the final quarter may be concerning to Victory Christian.

Wolves’ Senior quarterback Blake Machen is 6’3” 200lbs, and has the chops to deliver deep touchdown strikes, as he proved with a 82-yard touchdown completion to Sophomore Pacey DeLoach. Fayetteville Junior running back Luke White, ran for over 400 yards last year and broke off a few long runs last week, including an 18-yard touchdown.