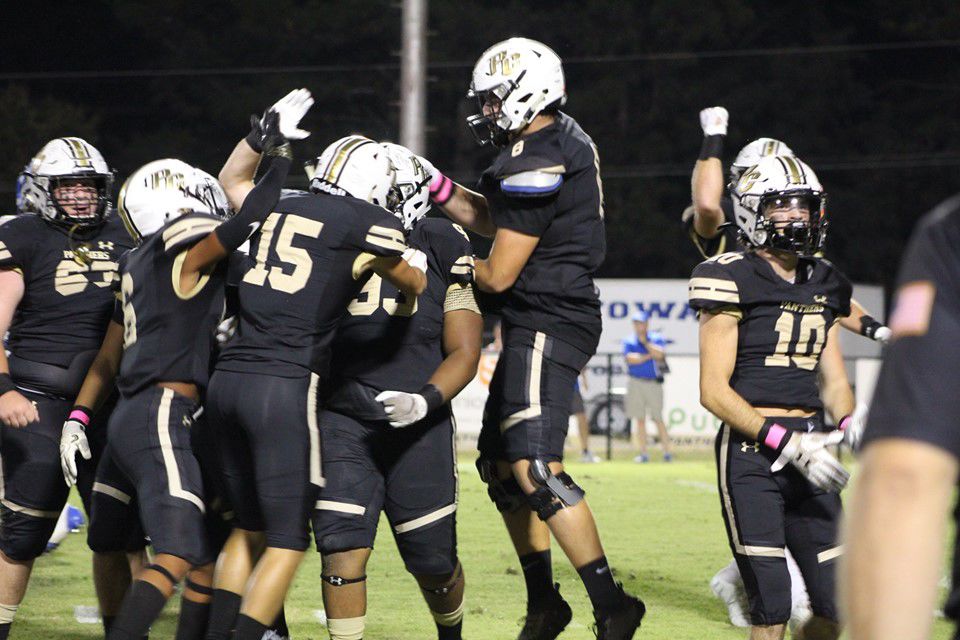 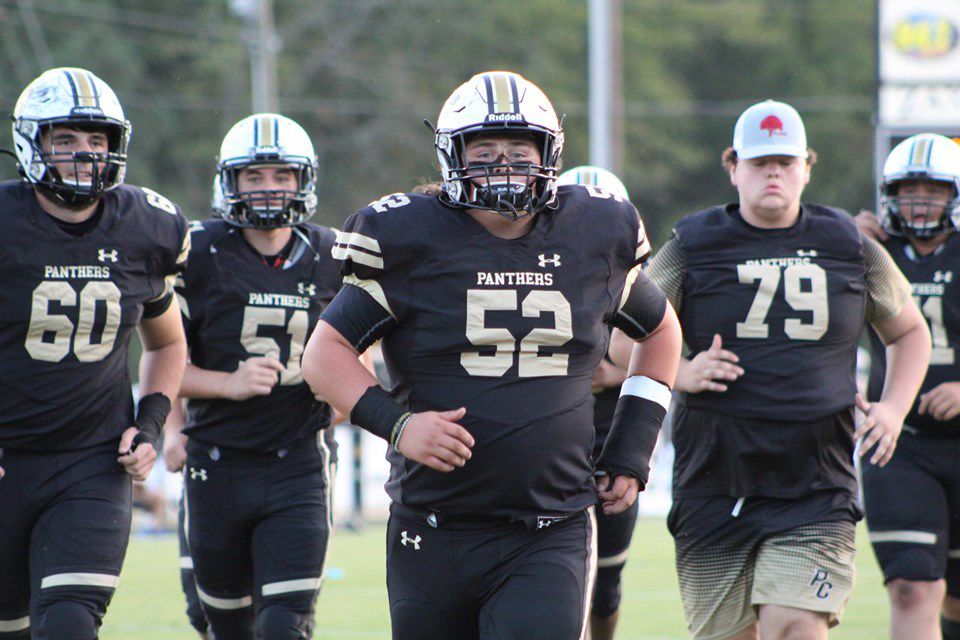 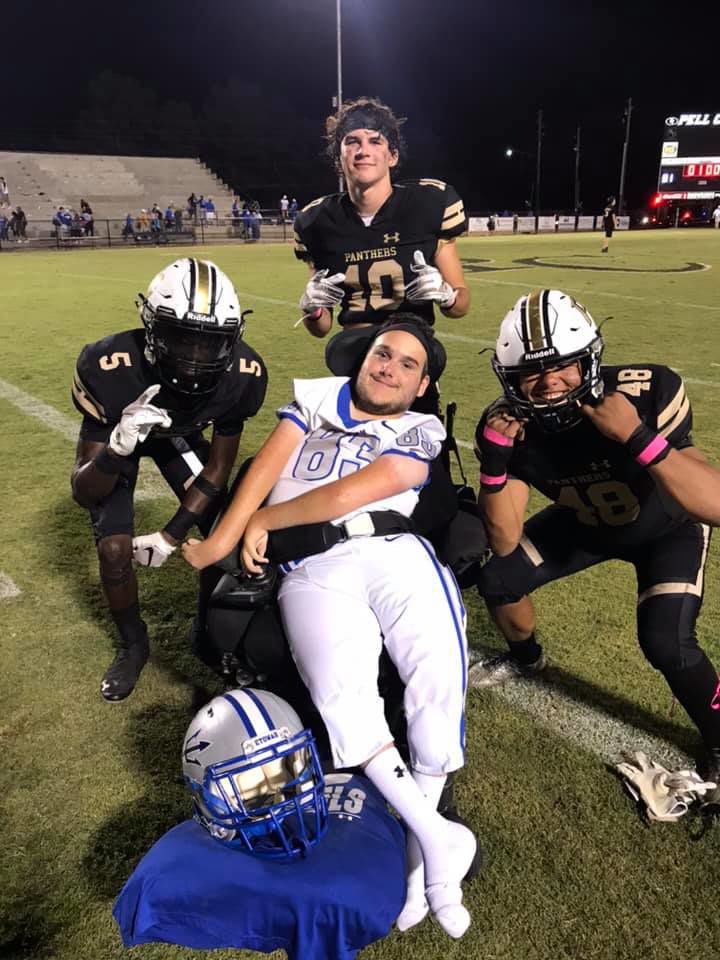 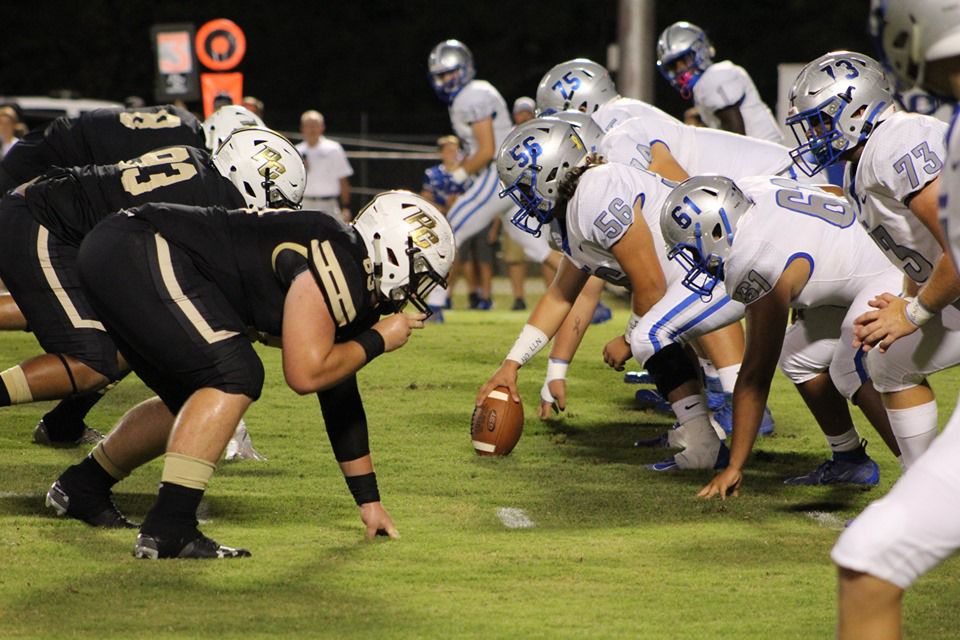 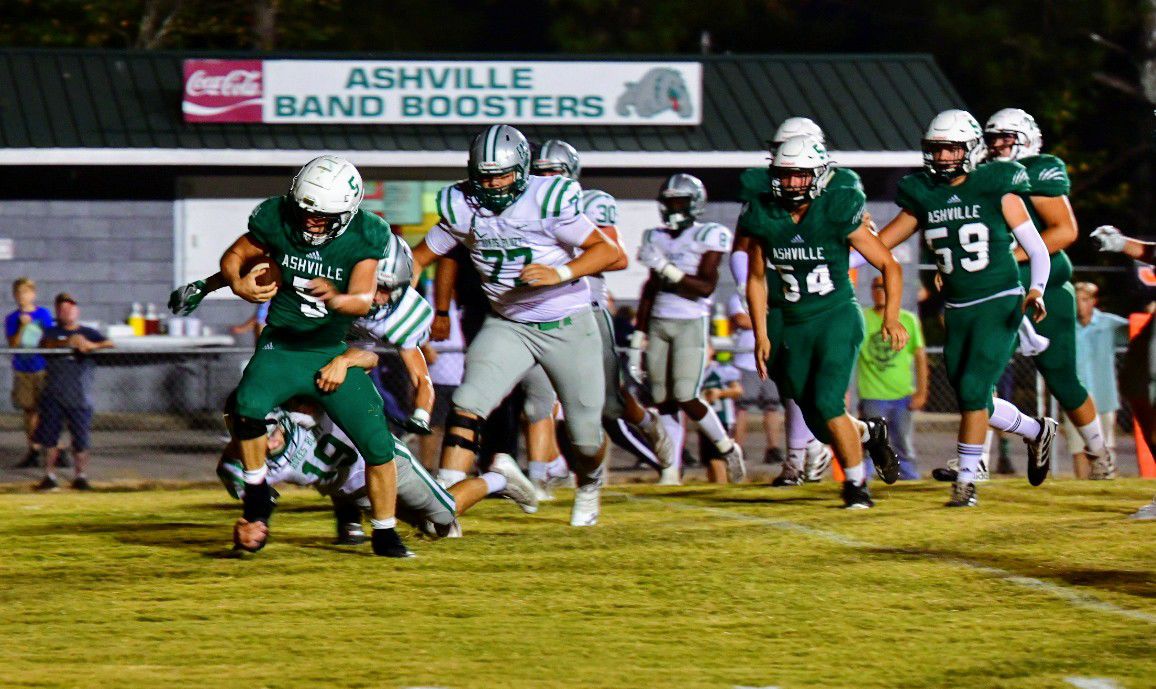 The Pell City Panthers shocked the high school football universe last week when they defeated the No. 4 team in Class 5A and previously undefeated Etowah.

To say the win was an upset does not come close to describing what happened at Pete Rich Stadium last Friday. It was gleeful domination in all three aspects of the game. It was a relentless running attack by the Panthers’ Kelton Seals and David Keith, coupled with a near perfect quarterback performance by Mitchell Gossett. It was a bruising defense shutting down the Blue Devils and wrenching the ball away from their offense three times. It was opportune special teams moments that led to points. This was no anomaly — this was a statement game that completely changes the fortunes of football programs. The Pell City Panthers who entered October are not the team from the first half of the season — this is a team others should genuinely fear. This is a team that can, paraphrasing legendary Auburn coach Pat Dye, ‘Take your manhood.’ We haven’t seen a team like Pell City around here since St. Clair County’s 2017 playoff team.

This week’s opponent is region power Clay-Chalkville, which is off to a 4-2 start. Normally, this sportswriter would write about the strengths and weaknesses of this week’s competition and predict an outcome, but that is difficult to do considering how much Pell City has made us in the press look like absolute dunces (which must be very rewarding for the Pell City coaches, players and fans). Nevertheless, Pell City’s defense will have its challenges against Cougars stars like quarterback Damione Ward and wide receiver JaMichael Thompson.

With respect to Victory Christian’s fine season and the encouraging signs coming out of Springville and Moody, this week’s Pell City game is the story of the year. What it leads to down the stretch and how it affects the Panthers as a team for the season and for the next few years is entirely in their hands.

This week, Ashville travels to play Cherokee County, which have shown itself to be inconsistent and vulnerable, but hungry and fighting for a playoff berth out of the region.

The best way to describe the Cherokee County team is a patched-up program that is trying to cover the many losses from its 2018 senior-heavy roster. The Warriors’ offense is led by quarterback Slade Alexander, who has steadily improved his passing accuracy as the season has progressed. Alexander has been given several sure-handed receivers in Connor Elrod, Courtlin Brooks (#5), Whit Johnson (#15) and Colton Hill (#2). Arguably Cherokee County’s most talented player is running back/linebacker Julian Bynum (#4). Cherokee has athletes. Cherokee has talent — especially at the skill positions. Cherokee also has problems in the interior and the defense. The Warriors do feature a fantastic All-State linebacker in Kendrick Fife, but there is only so much one man can do without support, which has been spotty this season.

Ashville needs to have the mindset this is a winnable game. The talented leadership of Ty Armstrong, Luke Harris and Derrick Walker makes Ashville competitive. These three young men will lead, and the rest of the team will follow. Expect a game a lot closer than many would predict.

At first glance, Holtville is a team with an impressive 4-2 record with an offense featuring an interesting two-quarterback rotation that has worked all season. What that record masks is a Bulldog program that is a streaky team on both sides of the ball. It obscures a roster of players that has been dinged up and dealing with injuries all season, most notably to senior quarterback Drake Baker. Holtville quarterback Braxton Buck has picked up much of the slack and has proven himself to be a good team leader, but he too is dealing with a nagging injury.

Leeds comes in with an unexpected 1-5 record, but three of those losses are outside the region. These next three weeks feature three region opponents, and the Green Wave is now in a must-win situation with Holtville, which is 2-2 in the region. Leeds has fought hard in every game but came up short in two matchups it could have won, including last week’s game against Talladega. Maybe Leeds is missing opportunities, maybe it has been unlucky. Whatever it is, the opportunities must be seized and its luck must change starting now. Winning its next three games guarantees a playoff berth. Beating Holtville and splitting the next two games could still get Leeds into the postseason. It all pivots on this Friday’s matchup.

The rivalry game between Moody and Springville is always an exciting matchup. This year’s chapter in this saga is the “Tale of the Mirror.” Lining these two sides up against each other is like looking into a mirror — they are virtual carbon copies of one another. That means one can expect a four-quarter game filled with lead changes, a lot of drama, and a wild finish. Keeping fingers crossed.

Who is taking the snaps for Springville? None other than the elusive quarterback Pearson Baldwin, who is confident with his quick game and intermediate passes but can make you pay with his legs on quarterback scrambles or designed runs. Oh yeah … I just described Moody quarterback Connor Rush.

Who is Moody’s go-to guy at running back? Athletic, reliable and steadily improving feature back Terrance Moore, who has proven he is capable of being a 100-yard-per-game rusher every week. Oh yeah … I just described Springville running back Kobye Payton.

Springville’s Baldwin has his favorite target downfield in senior Jace Hayes. Moody’s Rush has his own in senior Will Grames.

Up and down these rosters, it is close matchup after close matchup. The winner? Don’t bother flipping a coin or drawing straws to pick one — this matchup is too good to miss. The only sure thing about this week’s game is that it will be a sellout at Bill Morris Stadium.

Ragland’s season had a rough beginning, then a satisfying victory over Talladega CC, followed by closely fought but frustrating losses against rivals Victory Christian and Appalachian. The Purple Devils may not be where they want to be, but they are definitely headed in the right direction.

This week’s game against Valley Head is much like a mid-semester report card. How Ragland does against this strong region team will tell the Purple Devils a lot about how competitive they have become.

The Tigers are solid on both sides of the ball. Offensively, they have a sizable front led by their 300-pound senior center Luke Harrison. Valley Head deploys a multiple, read-option attack it can play out of shotgun or from under center. The Tigers feature three weapons offensively — quarterback Jordan Burt options to himself or his featured runners in seniors Waylon Collins and Marlon Trinidad, both of whom can fly. They score in bunches and are very hard to get under control.

Ragland’s vaunted offense that has pummeled opponents in past years is a little down this year. Valley Head’s defense, led by tall and rangy defensive end Hayden Fletcher, won’t make things any easier. Still, Owen Schall has played admirably all year and, with the help of his quick skill players Nathaniel Kelley and Kentrell Turner, the Purple Devils do have the tools to move the ball on Valley Head. Everyone who has seen Ragland play knows it’s a better team now than it was at the start of the year. How much better we will learn on Friday.

It appears that the Saints’ coaching staff has made a very important decision that should pay dividends in the upcoming seasons in Odenville. The Saints will spend the rest of their season coached up and prepared to compete, while at the same time giving more and more playing time on Friday nights to their younger players.

On the offensive side of the ball, sophomore quarterback Josh Struggs, who transferred in from Moody this season and has had to learn a brand new playbook, has been getting more involved in games. Surrounding Struggs is a youth movement, including sophomore wide receivers Josh Ruff and Jacoby Blanks. Other young guys getting playing time are Jackson Lindsey, defensive nose guard Kaden Robertson and free safety Kaven Johnson.

Whether this is intentional or out of necessity, the Saints’ youth movement means more snaps and more experience for a group coming up together that could step it up competitively in 2020 and peak in 2021.

Meanwhile, the games go on and this week it is the 2018 state champions of Central-Clay. The Volunteers feature a loaded roster, including All-State selections in running back Quentin Knight and defensive end Davion Phillips.

The Volunteers will be a test of the young Saints’ ability to play with poise and execute their game plan with efficiency and effectiveness. To compete with the best in the future, the Saints need to be exposed to the best now, which will be a master class that will give the Saints’ young lineup invaluable experience to capitalize on next season.

The Lions roll into this week riding high on a three-game winning streak, which includes their first-ever victory over rival Winterboro. The Lions will need the confidence provided by their winning streak because they travel to play Class 1A No. 6 powerhouse Spring Garden, which leads the region with an undefeated record.

The Lions are now a known quantity — a scrappy, brawling squad of overachievers that relishes the fight and won’t let any opponent overwhelm it. That is the spirit that will be needed this week because Spring Garden is loaded with talented players and a deep bench.

The Lions need to prepare for a four-back Panther backfield that never seems to tire and reloads on every snap. Quarterback Ryley Kirk is an effective runner, but the real grinders out of Spring Garden’s backfield are two excellent, speedy running backs in Weston Kirk and Andrew Floyd, who are backed up by power running fullback Luke Welsh. All season, this powerhouse backfield has stretched defenses while exhausting them. Victory Christian’s ever- improving defense needs to go into overdrive and do what no one else has been able to do — tie up the backfield and put the Panthers in third-and-long situations.

One other thing that will be exciting to see is how Victory Christian freshman quarterback Dalton Lewellyn responds to a ranked team. Lewellyn has been such a great surprise to the Lions’ faithful, who have embraced him as a leader who will mature into a star quarterback for years to come.

Victory Christian’s plan will be to hold onto the football and move the football, with Lewellyn, senior Lee Yeager and tight end Pate Cheatwood doing much of the work. Ball control and ball security are the Lions’ keys to competing this week. There were some miscues last week by the Lions’ offense, including a few fumbled footballs. Those mistakes will be cleaned up by Friday if Coach Breland has anything to say about it … and he does.

CROPWELL - Mr. Jerry W. Bickerstaff, age 73, passed away Thursday, July 30, 2020. He is preceded in death by his parents, Elbert and Josephine Bickerstaff and brother, Larry Bickerstaff. He is survived by his wife of 52 years, Pattie Bickerstaff; two daughters, Kathy (David) Parnell and Kell…

Geneva Florine "Ginny" Black, 77, of Coal City, Alabama, passed away Sunday, July 12, 2020 in a Birmingham hospital. She was preceded in death by her son, Alan Van Higginbotham and her parents, Joe and Orene Thornburg Black. Ms. Black was a retired nurse. For many years she was a psych nurse…