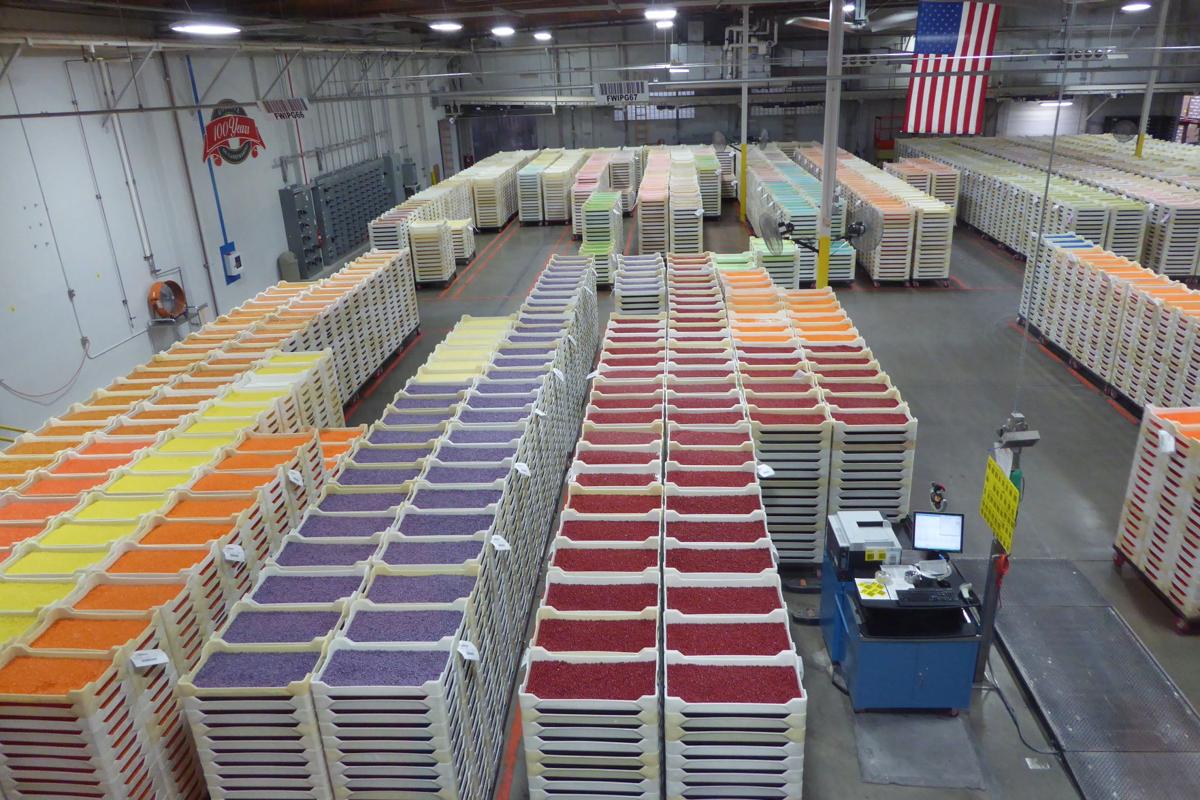 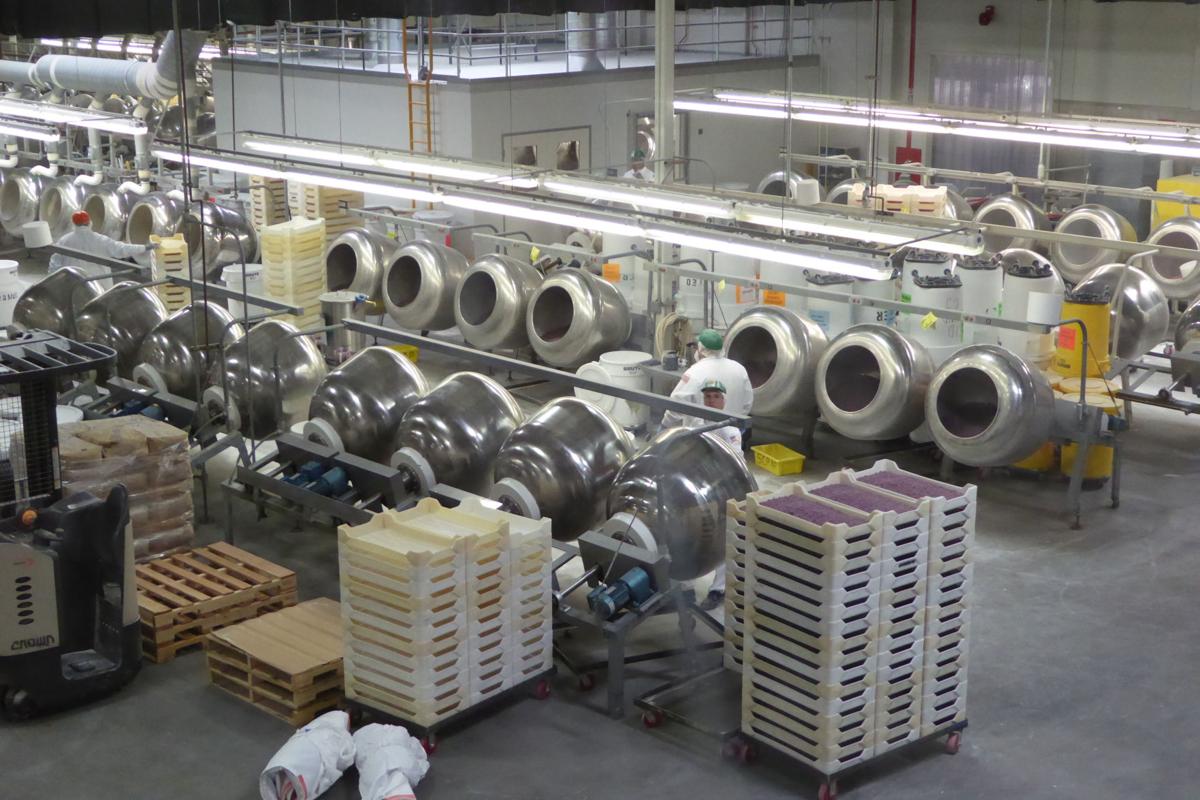 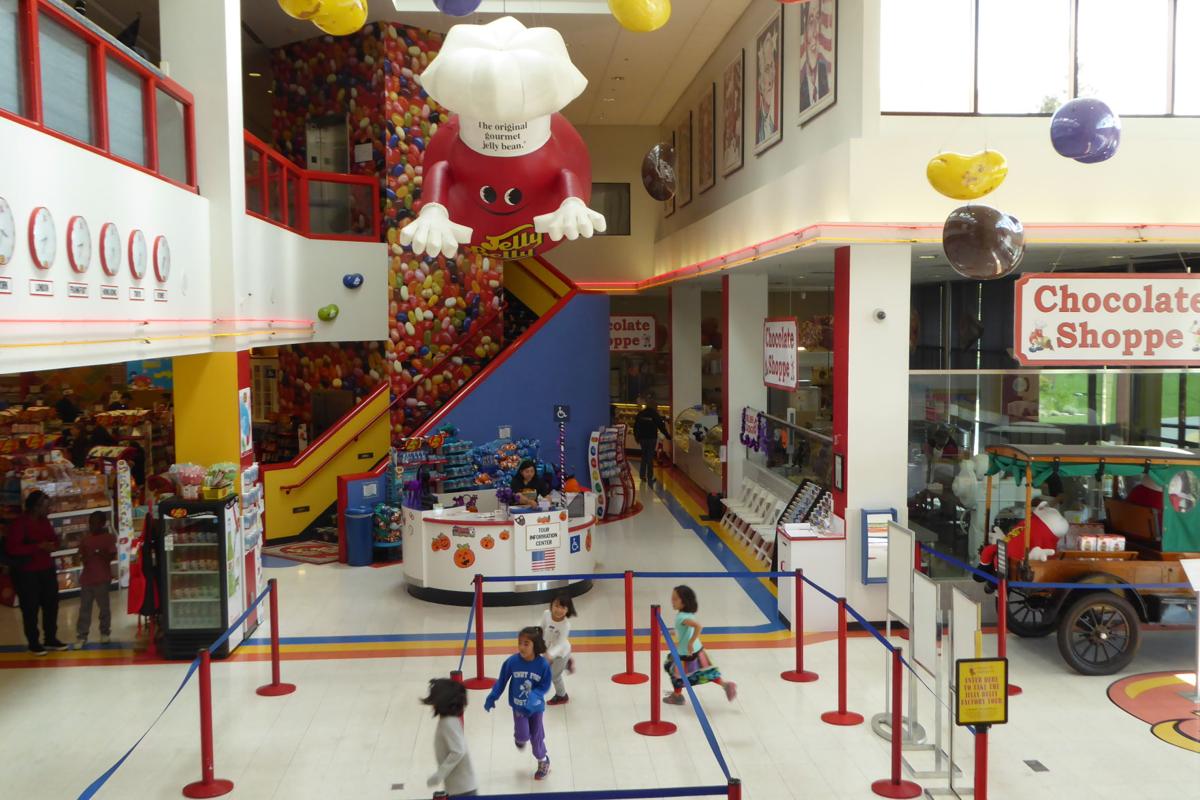 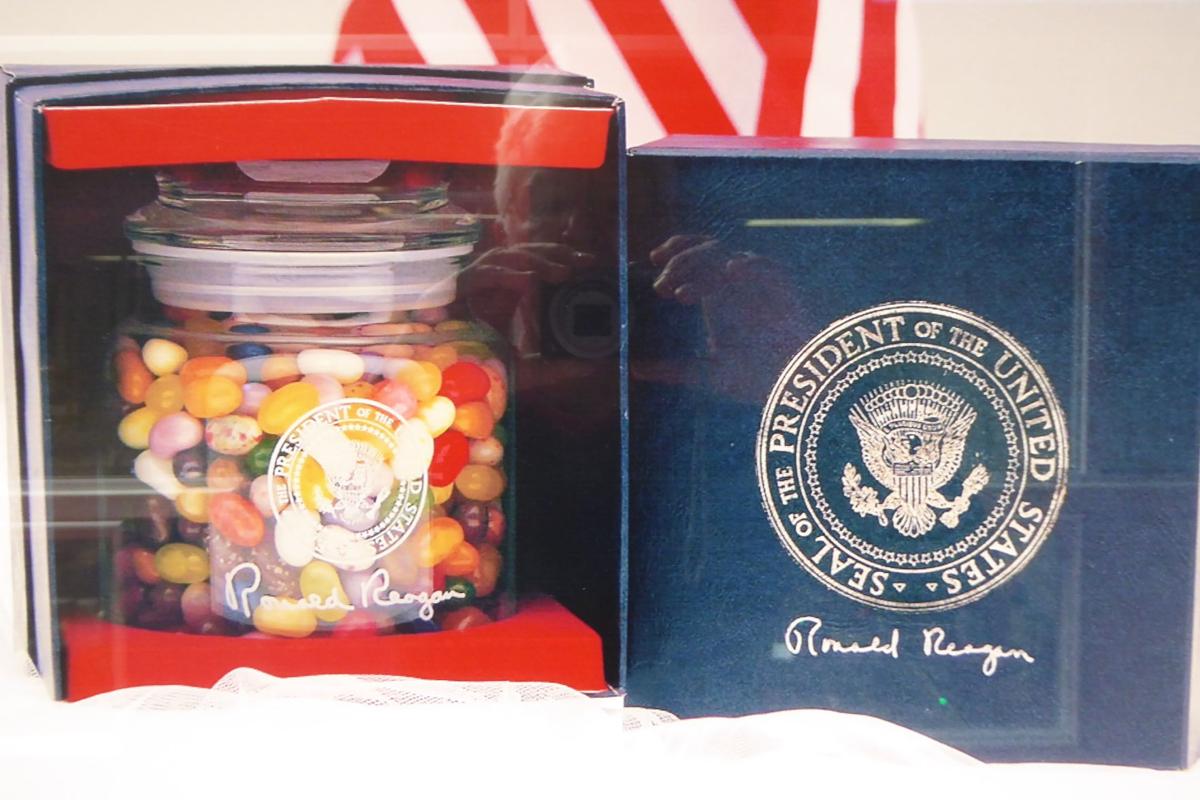 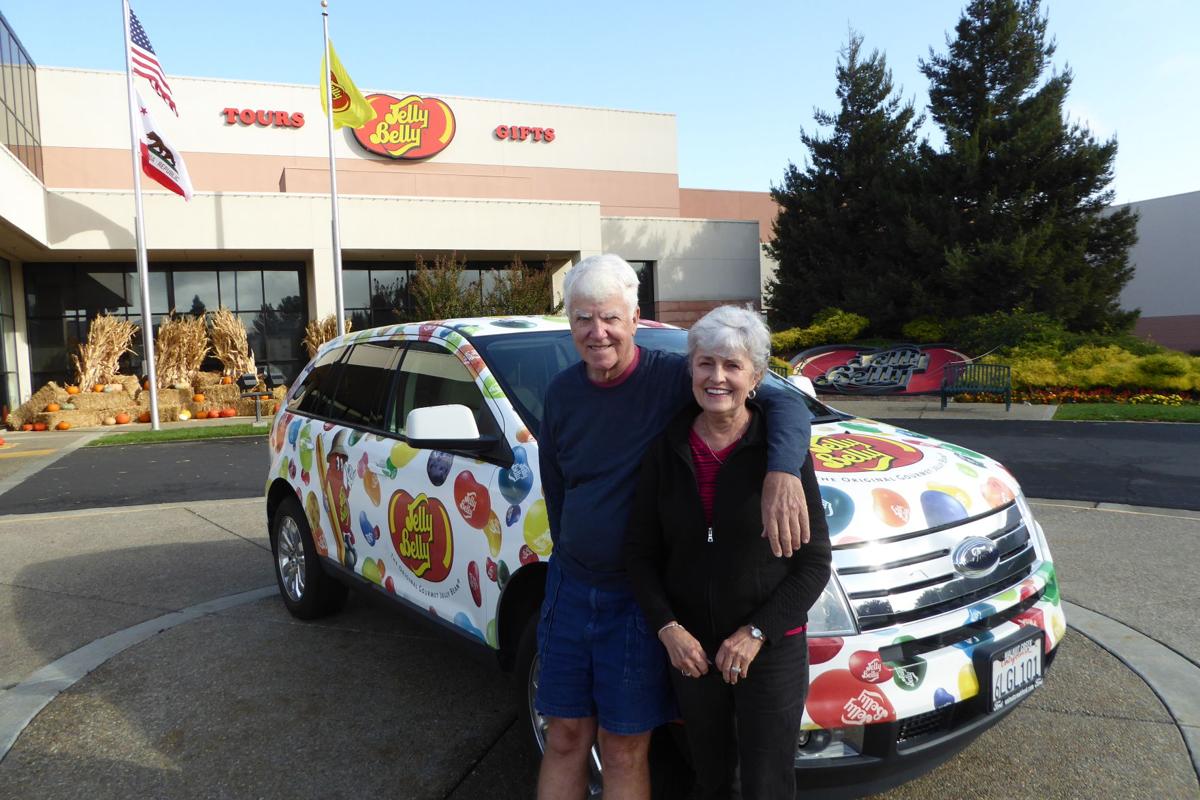 David and Kay Scott in front of the Jelly Belly Candy Company in Fairfield, California. 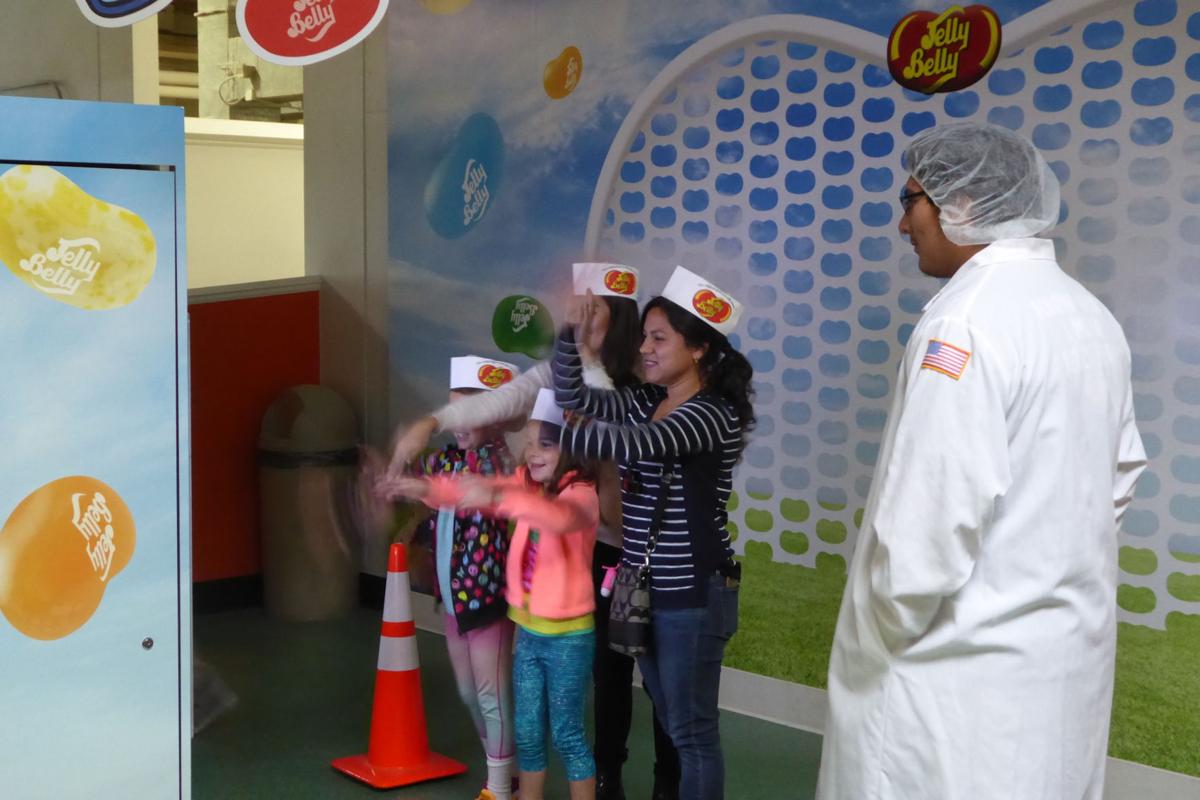 Children participate in one of the interactive games included on the tour. 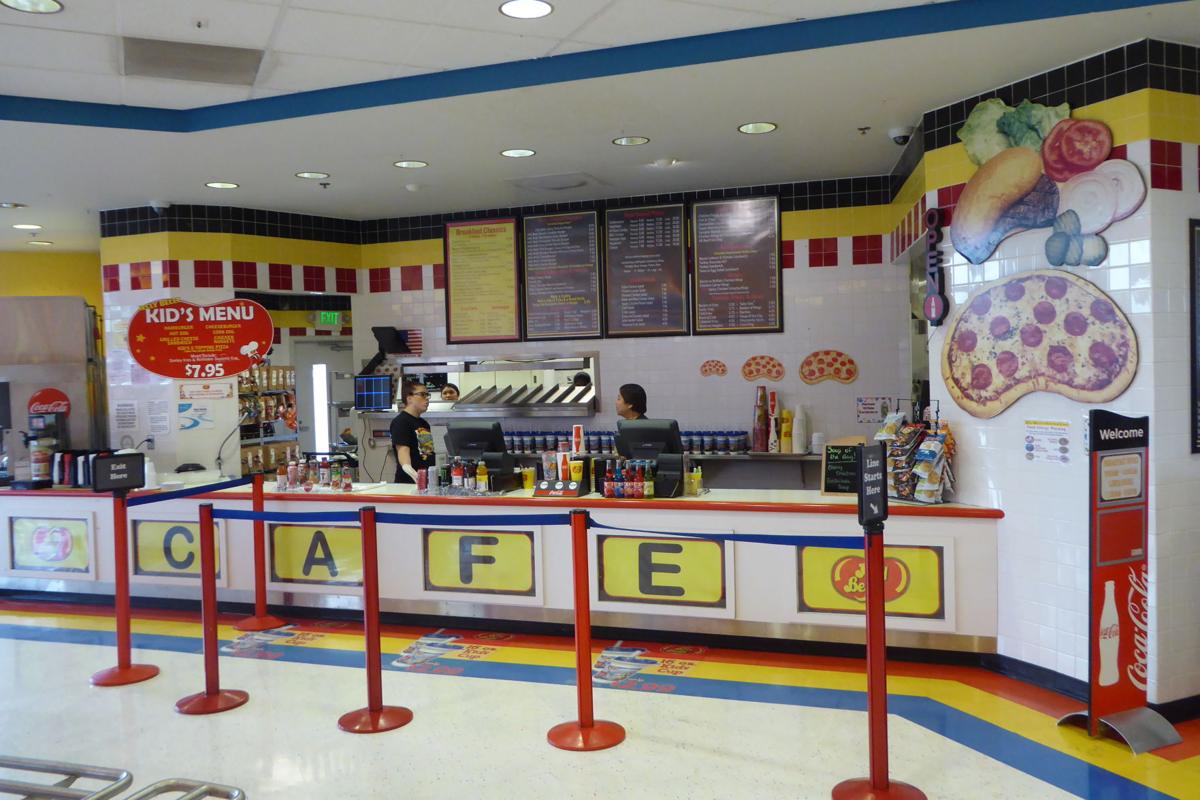 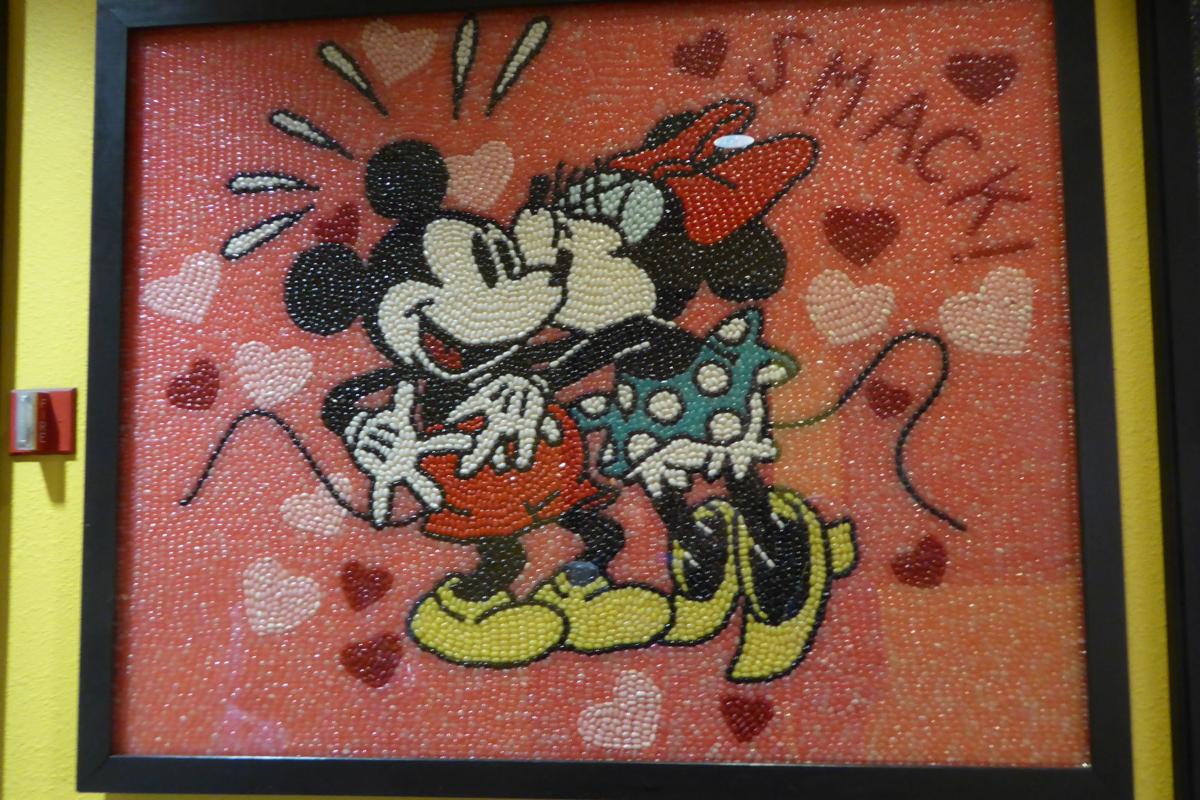 An example of Jelly Belly art. 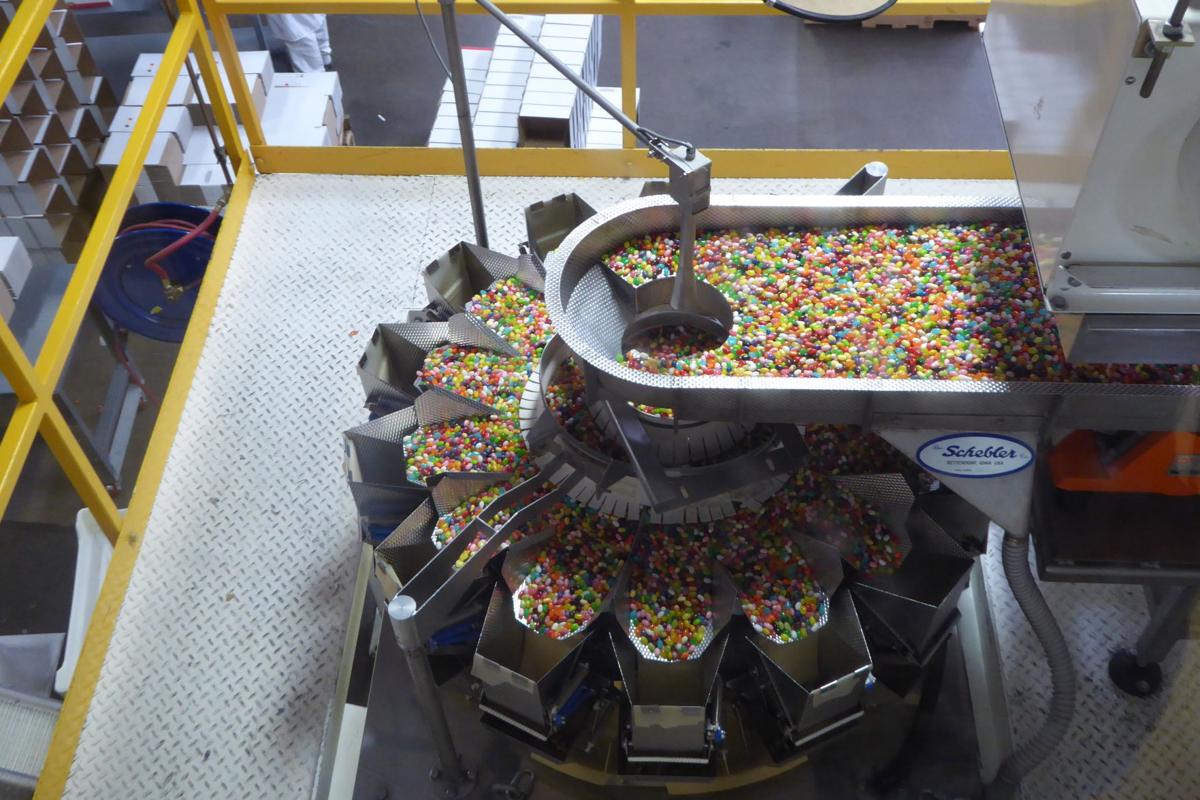 Jelly Bellies being weighed and bagged. 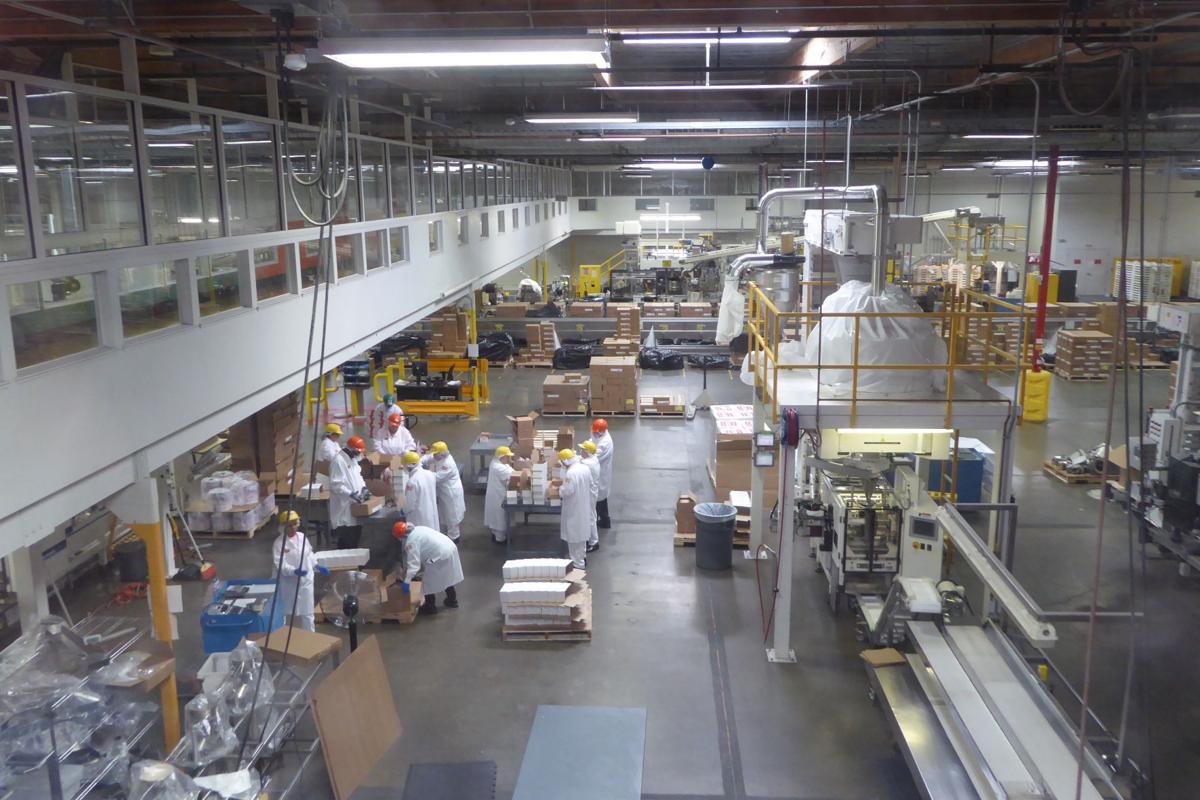 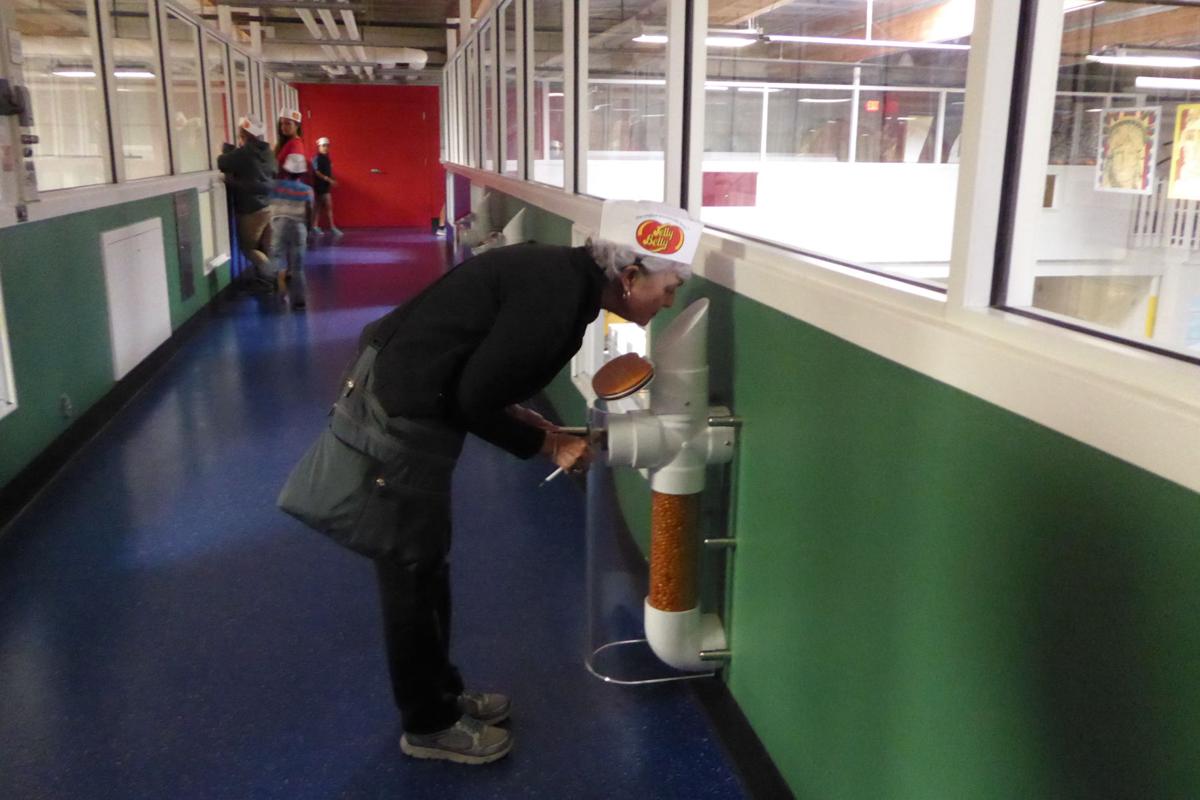 Kay stops at one of 10 smelling stations included in the plant tour. 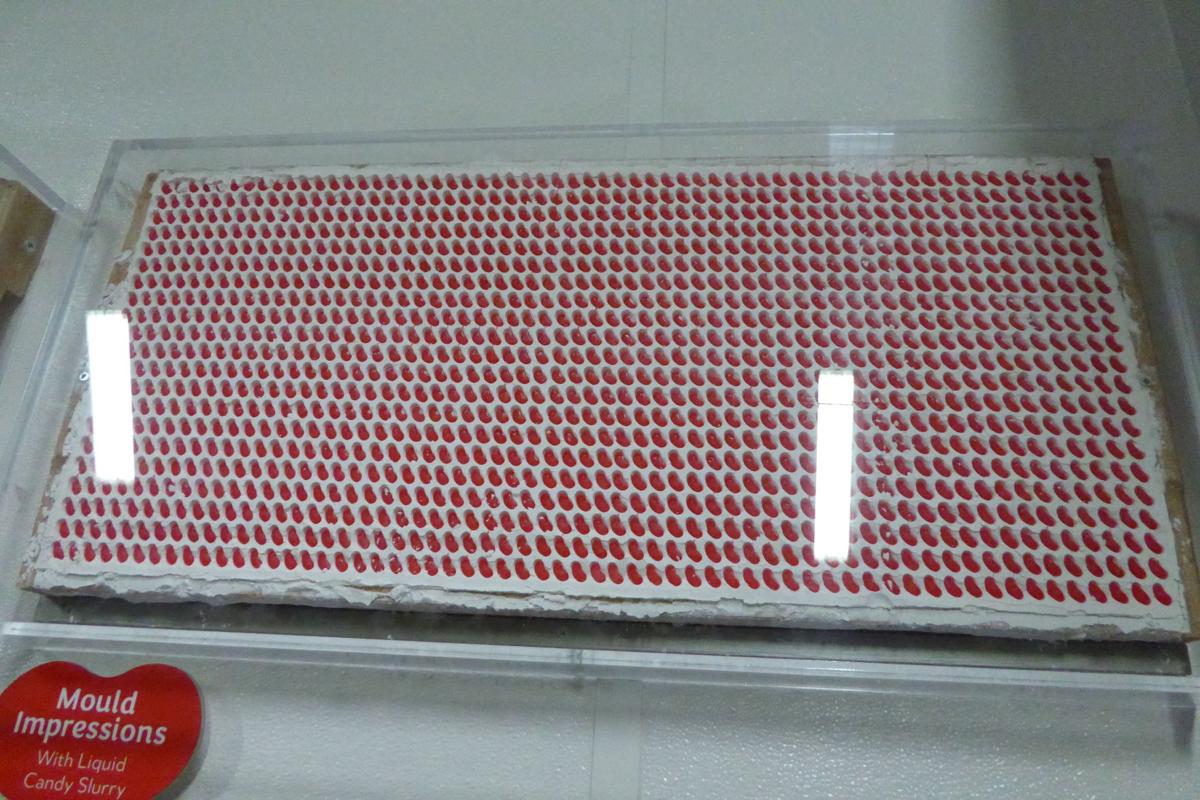 Jelly Belly centers in a mold made of corn starch.

Children participate in one of the interactive games included on the tour.

An example of Jelly Belly art.

Kay stops at one of 10 smelling stations included in the plant tour.

Jelly Belly centers in a mold made of corn starch.

When traveling, we enjoy stopping for company tours, most of which are enjoyable, educational and free. We have toured a Bumble Bee tuna plant in Oregon, a Blue Bell ice cream plant in Texas, an aluminum smelter in British Columbia, and a Buffalo, New York plant that, believe it or not, made player piano rolls. There were many more, but you get the idea.

Toward the end of a fall trip in California we passed near the Jelly Belly Candy Company headquarters and manufacturing plant. As fans of these flavorful treats, we wheeled into the parking lot to see about a tour.

During our tour we learned about the company's history that dates to 1869, when German immigrants Gustav and Albert Goelitz, began making and selling candy in Belleville, Illinois. The 1893 depression eventually sank the firm, but family members restarted the candy business in Cincinnati, and later, Chicago.

Time required to make most Jelly Bellies: 7 to 14 days

Percent of production ending in Belly Flops: 1% to 2%

Calories in one Jelly Belly: 4

Number of Jelly Bellies in a pound: 400

Recommended number of beans to eat at a time: 1

In 1986, the Herman Goelitz Candy Company moved its headquarters to the current location in Fairfield, California, where it built a new plant that soon doubled in size. Increased demand for the gourmet jelly beans caused the California owners to ask their Illinois cousins for assistance with production. The two companies merged in 2001 to become the Jelly Belly Candy Company.

The firm currently manufactures more than 100 confections including candy corn, Chocolate Dutch Mints, gummi candies, and more than 100 flavors of Jelly Bellies. Its two domestic plants distribute products across the U.S., while a plant in Thailand manufactures candy products for more than 80 countries around the world. The company remains family-owned and is currently managed by the fifth and sixth generations of the Gustav Goelitz family.

Innovation continues with new flavors and products, according to John Jamison, vice president of retail operations. The company hitched a ride on the Harry Potter craze by creating a selection of Bertie Botts Every Flavour Beans with varieties that include dirt, earthworm and earwax. We had been unaware of these and, also of the firm’s BeanBoozled Jelly Bean packages advertised as the Russian roulette of candy games. Each package contains jellybeans with an identical appearance but different flavors, such as moldy cheese/caramel corn, barf/pecan, canned dog food/chocolate pudding and rotten egg/buttered popcorn. Jamison said terrible smells from the unusual flavors led the company to close in a separate space on the factory floor for producing them.

Getting there: The Jelly Belly visitor center is at 1 Jelly Belly Lane in Fairfield, California. Fairfield is just off Interstate 80 and Hwy 12 between San Francisco and Sacramento.

Additional information: Visitors may take photos in the visitor center and during the factory tour, but flash photography is not permitted inside the factory. Visit www.jellybelly.com.

Free self-guided tours of the Jelly Belly plant are offered daily from 9 a.m. to 4 p.m. Luckily, we were able to tour on a weekday when the plant is operating. The tour covers five production and packaging areas with large video monitors describing each activity on the plant floor below the visitor walkway. A company timeline, photos and some clever Jelly Belly artwork are included. There are also interactive activities, including video games and smell stations, where visitors try to guess a flavor. It took us about an hour to complete the quarter-mile tour, but the time required for a tour depends upon each visitor's interest level. Tour participants each receive a small bag of Jelly Bellies.

We learned a quite a lot on our tour. For example, it takes from seven to 21 days, depending on the flavor, to make a Jelly Belly. After sorting for quality, the words “Jelly Belly” are printed on each shell. Imperfect beans are set aside and packaged as Belly Flops that sell at a discount.

Following the tour, we enjoyed lunch in the Jelly Belly Cafe. We then visited the Jelly Belly Chocolate & Wine Experience, where local wines are paired with the firm’s chocolates. The final chocolate is in the shape of a shot glass and filled with wine. An under 21-age version is offered. Special public events are held throughout the year.

David and Kay Scott are authors of “Complete Guide to the National Park Lodges” (Globe Pequot).  Visit them at mypages.valdosta.edu/dlscott/Scott.html.