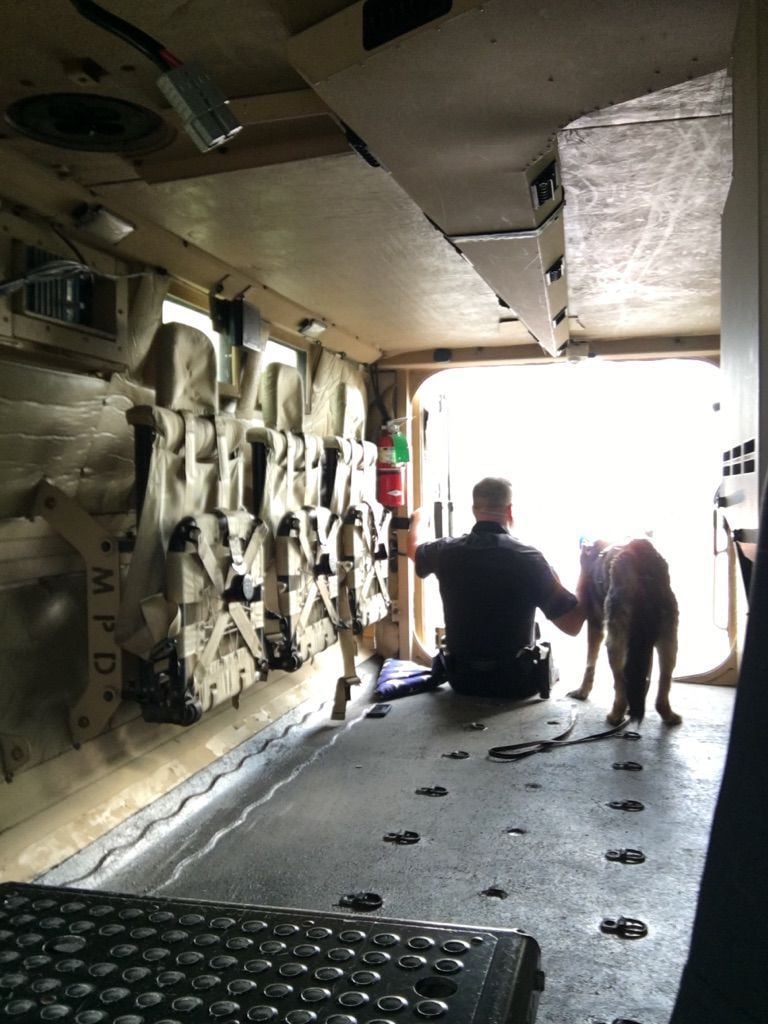 K9 Officer Bosco takes his last ride in the Muskogee Police Department's Special Operations Unit truck alongside his partner, Lt. William Peters. The 11-year-old K9 was put to sleep at the veterinarian's office Thursday to end his pain and suffering, Peters said. 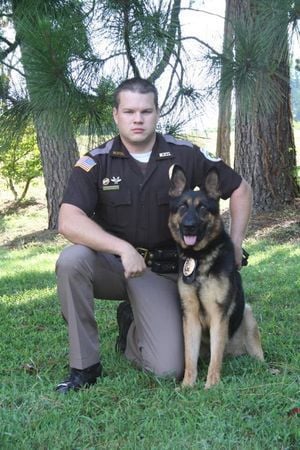 Muskogee Police Department Lt. William Peters and his partner, K9 Officer Bosco are shown here in a picture taken when Bosco was much younger.

MUSKOGEE, Okla. –– Bosco, a retired K-9 officer, rode by the side of his long-time partner, Lt. William Peters, for the last time on his way to the veterinarian clinic to be put to sleep.

They were escorted by a team of law enforcement officers and first responders as the 11-year-old German shepherd was taken to be euthanized at the Eastside Veterinary Clinic in Muskogee, Oklahoma.

Peters said Bosco has been living with his family since the K-9 retired from service in 2014. The dog had difficulty standing and was suffering from hip dysplasia as well as a slew of other health problems, he said.

“Obviously, I didn’t want to,” Peters said. “But he spent so much time taking care of us, I felt like we had to care of him so he’s not hurting anymore.”

Bosco looked around slowly, and barely stayed upright as he was gently laid on a Muskogee County Emergency Medical Service stretcher outside the clinic. Law enforcement officers from the police department, Special Investigations Unit, sheriff’s office, and MCEMS lined up outside, silently awaiting the news Bosco was gone.

“K-9 Officer Bosco served the Muskogee Police Department with honor, distinction and bravery from 2008 to 2014. End of watch April 20, 2017. Thank you for your service. You will be missed,” said a Muskogee dispatcher over the police radio a short time after Bosco was wheeled inside.

Bosco was an award-winning K-9 and worked alongside Peters primarily with the Special Operations Unit. The duo was named Oklahoma State Canine Team of the Year by the Association of Oklahoma Narcotic Enforcers in 2013.

Bosco’s last days were happy, though, Peters said, and after he is cremated, his remains will go back home with Peters.

“Living with me, that was the cool thing since he retired,” Peters said. “I have a 4-year-old daughter, and they played quite a bit.”

After the dispatcher announced Bosco had died to the assembled officers and emergency responders, Peters came outside and hugged each and every one.

Then, he brought out a folded American flag, badge and vest and laid it gently in the back of the special operations truck.

Funeral services for Jimmy Wade Rich, 55, will be Tuesday, January 11, 2022 at 11 a.m. in the Usrey Funeral Home Chapel in Pell City, Alabama. Burial will follow in the St. Clair Memorial Gardens. Mr. Rich was preceded in death by his father, Donald Rich. He is survived by his son, Alan (Ang…