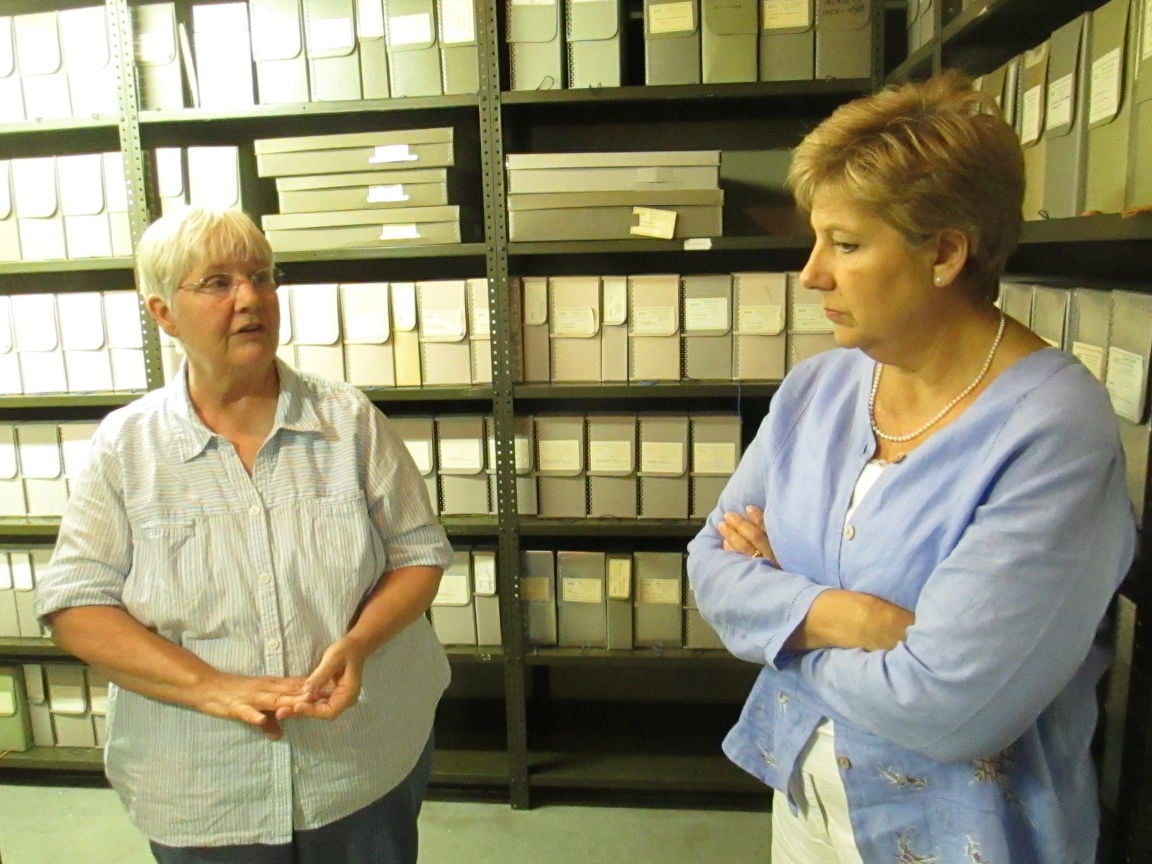 Sister Eleanor Craig, left, talks with Carol Pike in Sisters of Loretto Community vault, where the order keeps some of its rarest Bibles. Pike re-discovered a 1790 Carey Bible while volunteering to help the sisters catalog rare books. 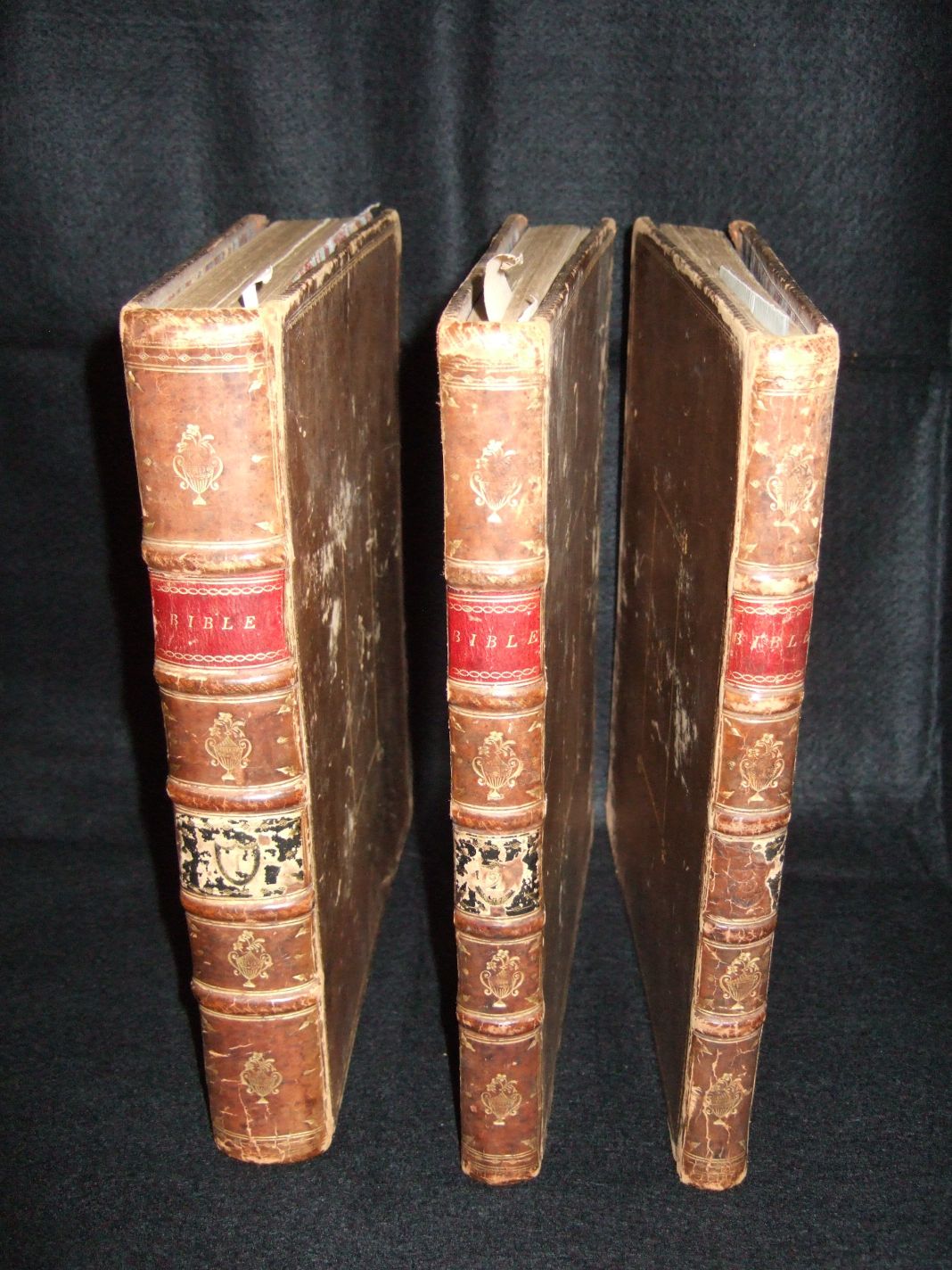 The three-volume Carey Bible that belonged to Father Stephen Badin, who worked in central Kentucky and northern Indiana, has  returned to the University of Notre Dame.

Sister Eleanor Craig, left, talks with Carol Pike in Sisters of Loretto Community vault, where the order keeps some of its rarest Bibles. Pike re-discovered a 1790 Carey Bible while volunteering to help the sisters catalog rare books.

The three-volume Carey Bible that belonged to Father Stephen Badin, who worked in central Kentucky and northern Indiana, has  returned to the University of Notre Dame.

NERINX, Ky. – Carol Pike isn’t Catholic, and technically she’s not an archivist. She’s a former college and high school librarian and an elder for her Disciples of Christ church in Glasgow, Ky.

So Pike may have been an unlikely figure in what's best described as the re-discovery of a rare Catholic Bible, which for decades was stored in a vault at the Sisters of Loretto Community here and has since returned to the University of Notre Dame in South Bend, Ind.

Pike spent years cataloging a rare book collection for the Sisters of Loretto, a congregation of nuns and lay co-members who “work for justice and act for peace because the Gospel urges us.” Founded in 1812 as a teaching order, the community's headquarters  – the “Motherhouse” – is located in the central Kentucky community of Nerinx.

One day the community's archivist, Sister Eleanor Craig, asked Pike if she’d like to examine some of the books stored in “the vault,” a secure, climate-controlled room in the basement of the infirmary.

After passing through two sets of steel doors, Sister Eleanor pulled a cardboard box labelled “Rare Bibles” from the shelf and handed it to Pike.

As she opened a carefully wrapped volume, Pike had a Eureka moment.

“This is a Carey Bible!” she exclaimed to Sister Eleanor, who didn’t immediately recognize its significance.

Pike realized she was holding a 1790 Catholic Bible - the Douay-Rheims version printed by Philadelphia printer Mathew Carey. He printed only 471 of the Bibles, of which 28 are known to still exist.

Badin was a seminarian who fled France during Napoleon’s reign. He immigrated to Baltimore, where he was ordained in 1793 by Carroll, who wrote in the Bible, “To the Rev. Mr. Badin from his affectionate Bishop J. of Baltimore.” Badin was sent to minister to Catholics who'd settled in central Kentucky and purchased the land on which the Motherhouse now stands.

Badin would return to France for a while before coming back to the United States to minister to the Potawatomie Indians in the area that is now South Bend, Ind. He eventually turned over his land there to the local bishop, who later gave it to the Fathers of the Holy Cross, who subsequently established the University of Notre Dame.

Badin’s remains - originally interred at Cincinnati - were later exhumed and re-buried in the chapel on the site of his original cabin on the Notre Dame campus.

Thanks to the Sisters of Loretto and Pike, his Bible now resides there, too.

Pike, who started going to Loretto for retreats 12 years ago, began volunteering with the community's extensive collection of rare books in 2009 but was never invited to visit the vault. Sister Eleanor arrived in October 2012 and one day suggested to Pike that there were more books in the vault to examine.

“That was music to my ears,” said Pike. Moments later, she was holding the Carey Bible.

Sister Eleanor knew the vault housed rare Bibles but wasn’t aware it contained the rare Carey Bible. Because it had not been displayed, it’s likely that the sisters simply forgot how unique it was over the years.

Pike suggested Notre Dame might be interested in purchasing Badin's Bible. After a series of independent valuations and negotiations, Sister Eleanor and the university agreed on a “five-figure” purchase price.

So, on July 14, several sisters and Pike traveled to South Bend to present the Bible and participate in a Mass celebrating its arrival.

Notre Dame, which is displaying the Bible in its Hesburgh Library this fall, has also scheduled a symposium about it next month. Pike plans to attend.

“It just seems like Providence was at work,” she said. “… I’m just humbled and honored to be a part of such an extraordinary experience.”

Ronnie Ellis reports for CNHI's Kentucky newspapers and websites from Frankfort. Reach him at rellis@cnhi.com or on Twitter at @cnhifrankfort.